The other day I was working on an article about how Agents of S.H.I.E.L.D. is an awful lot like a reskinned version of Firefly when I realized I should probably check to see if other folks had written about that. They had.

That took the wind out of my sails, so I spent the rest of the evening delving into the site statistics for Difficult Run. I don’t generate any revenue from the site at all, but obviously you want more people to read what you’re writing as opposed to fewer, and I’m just sort of fascinated by the whole idea of publishing: what engages readers and builds an audience? To me, it’s an interesting question. So I always like it when folks like John Scalzi publish about their site statistics (like he did back in 2010 or more recently in January 2014). Also, as a blogger at Times And Seasons, I have access to their site stats as well1.

Since I took the time to make some pretty charts and graphs, I thought I may as well write up what I learned and what I”m hoping to see happen for the year of 2014 as far as blog traffic goes. 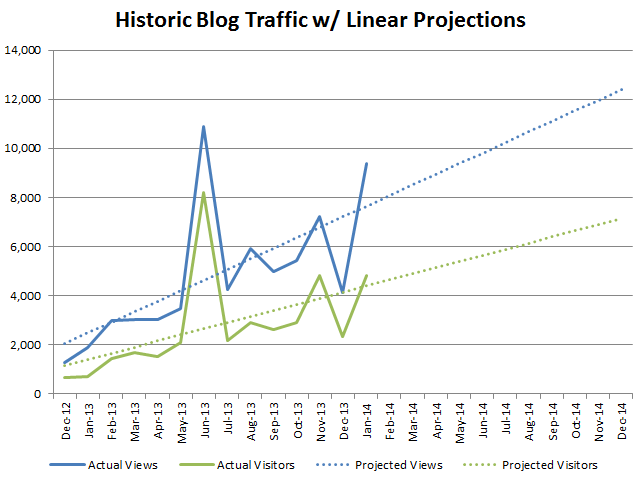 So this is my total monthly traffic for every complete month that I’ve had the site running2. (I launched it during the month of November 2012.) You can see a general upward trend (which is nice), along with a really big spike in June 2013 and a really low dip in December 2014. The spike is from the post Health Insurance vs. Food Insurance which got posted on Reddit and drew over 5,000 views in one day. The dip is because December 2014 was insane: there were holidays, I was moving my family, and I had some ridiculous projects at work. It was a truly awful month, and I basically stopped blogging. Those two months are pretty clearly outliers, I think, but the question is whether or not January 2014 is also an outlier. That’s the month my mum poster her article on whether or not Mormon women ought to receive the priesthood, and it became the second most popular post on the site. I’m inclined to think it’s not an outlier, but I’ll get to that later.

I also did some really basic linear projections to get a ball-park idea of what kind of traffic I can expect to get by the end of 2014. As you can see, it looks like I’d be getting about 12,000 views / month or about 7,000 visitors / month. More on that  in a moment as well, but for now I thought it was interesting that the projections were diverging. That shows that ratio of views / visitor (e.g. how many pages a given visitor looks at) is changing. So I took a look at that as well. 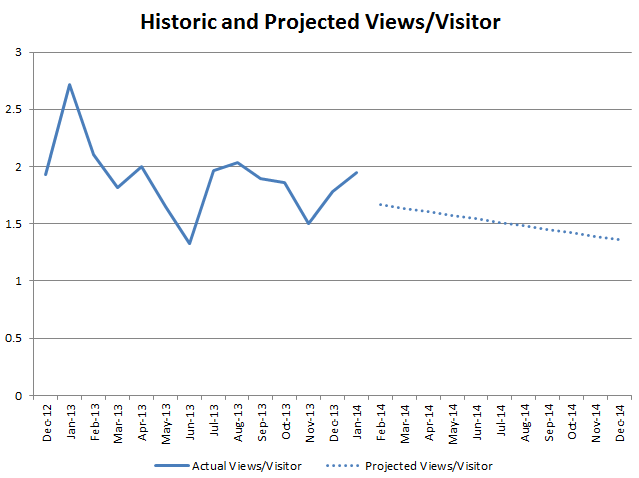 The overall trend is negative, which means that as time goes on my audience reads fewer articles per person. I think that’s probably a natural function of my audience moving outside of the core friends and family who came to see what I had to say early on and towards strangers who come across the site because an article gets linked here of there.3

Tracking both visitors and views seemed a bit messy, so at this point I decided to pick just one metric to concentrate on. I think views is the standard (probably mostly because it’s easier to track), but I decided that I would just check out the variability of the two and pick whichever one was the most stable. I picked the coefficient of variation rather than variance because it’s dimensionless, and views (0.55) was a lot less volatile than visitors (0.70), so from here on out I just look at views instead of visitors. 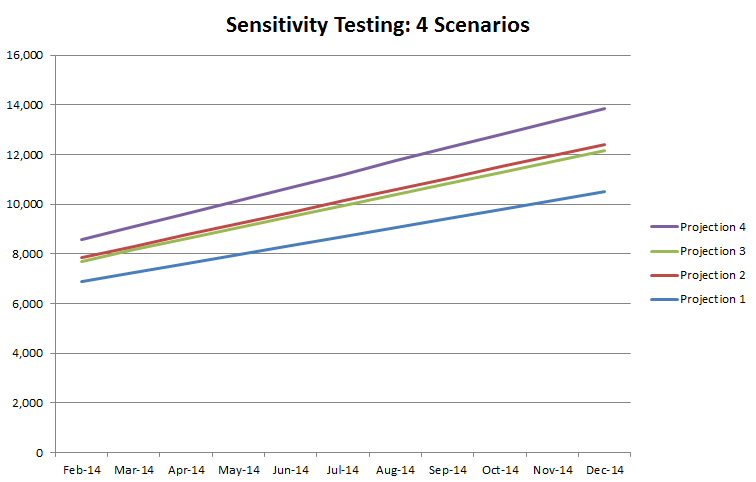 So what I did in this chart was look at the impact of different scenarios on future growth. Here are the scenarios:

So, which model fits the data best? So far, does my model look more linear or more exponential? 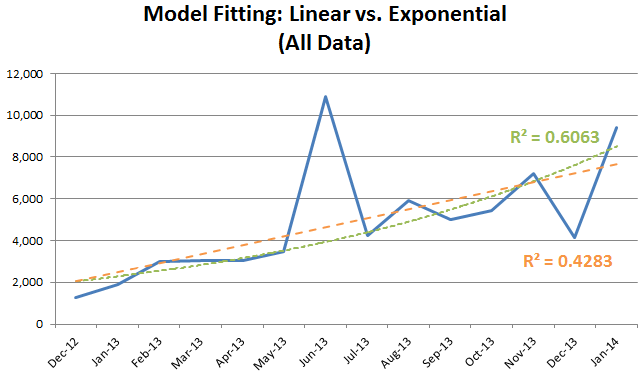 Without getting into the technical details, the R-squared value is a measure of how good your model fits the data. In this case I used all the data (no throwing out outliers) and compared it with a linear model and an exponential model. The linear model got 0.4283 (which roughly means it explains 43% of the variance in the data) and the exponential model got 0.6063 (so it explains about 61% of the variation in the data). Based on this: the data looks exponential. That’s good news if you’re me, because an exponential model is going to yield a lot more growth down the road. But there’s a caveat: when I started taking out outliers, the difference between the exponential and linear models all but disappeared. With just a couple of those outliers gone, the r-squared values were above 0.9 for each. Even though the exponential model always did better, the advantage is tiny once you throw out a couple of outliers.

Still, what would growth look like based on an exponential model? This chart–the last of the bunch–shows the original data, some linear projects, and some exponential projections all at once so you can get an idea of the possibilities. 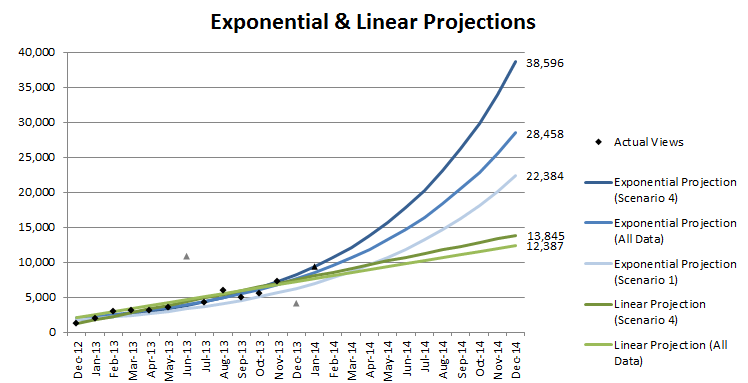 So here’s the fun part: which do I think it’s going to be? I think that the exponential model is the best model of growth in general, but with one big caveat. It assumes that the underlying reason for the growth is constant. For example, you only get the joy (or suffering, depending on which side of the coin you’re on) of compounding interest if the interest rate stays the same. Difficult Run doesn’t have an interest rate. It has content. And so my guess is that we’ll continue to see exponential growth if the quality and quantity of the posts keep up with reader expectations. The posts have gotten better, the site layout has gotten better, and I’ve recruited some good editors and guest posters. All of those efforts have to continue, but if they do then I think when I look back with the 2014 data all in a spreadsheet, the growth will look exponential rather than linear.

And, just for fun, I’ll make a specific prediction: I expect to see 25,000 monthly views by the end of January 2015. That doesn’t mean there will be 25,000 views in that month. There could be more or less, but we’ll be in that range. Which sounds pretty awesome, until I realize that that would still be about 4% of the monthly traffic that John Scalzi averaged through 2013.