In a recent article in Christianity Today, pastor and professor A.J. Swoboda writes the following:

Christians defend certain days of the Holy Weekend. For instance, we’ll defend the idea that on Friday Jesus actually died on a cross to save the world from its sin. Then we’ll turn around and defend Easter Sunday as the day that Jesus actually rose from the grave, defeating the powers of evil running loose in the world.

But nobody defends Saturday. Nobody writes apologetics defending the belief that Jesus actually lay dead for one long, endless day two thousand years ago. What’s the defense for that? If you’ve got the power to rise from the grave, why would you wait one whole long day to do it? Why not just rise from the grave, like, just a little later Friday night?

Then, he offers this startling reminder:

So much of Christian faith is Saturday faith. I call it “awkward Saturday”: that holy day to sit, wait, hope—unsure of what’s to come tomorrow. Saturday is the day that Jesus, and all understanding, lay dead…So much of faith is living in the awkward Saturday, living in the dark mesh of twilight between the moments of hopelessness and utter blinding hope. At times, we are all like the two disciples on their way to Emmaus who were really close to Jesus but didn’t always know it. In Luke 24, two disciples walked away from Jerusalem, where they’d just seen their Lord and Master die on the cross. Leaving, dejected, upset, hopeless, and broken, to find the next stage in their lives and careers. Unbeknownst to them, Jesus had been resurrected and was actually walking alongside them on their way to Emmaus. The hope of Sunday hadn’t dawned on them yet. The Gospels tell us that, on their way to Emmaus, the disciples were “downcast.”

This profound realization goes hand-in-hand with The Crucible of Doubt by Terryl and Fiona Givens. In our quest for certainty,1 we often stigmatize doubts, fear, and/or a lack of understanding. And sometimes all you can do in response is show up, like Joseph of Arimathea did: 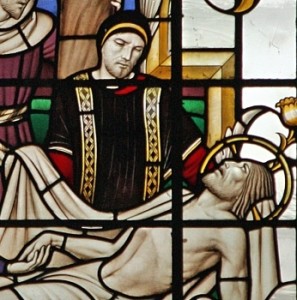 According to John—after the crowds fled and the slowly muffled screams of the executed ceased—Joseph made the sorrowful journey to receive Jesus’ body as Friday drew to a close. Slowly, carefully, Joseph lowered the cross, pulled the large Roman nails from Jesus’ fragile hands and feet, and carried him in his arms.

Allow your imagination to paint the devastation of pulling those nails and along with them uprooting your greatest dreams and hopes…Years earlier, most likely, Joseph had left behind his life of predictability and safety to follow an unknown Savior, only to have his vision crushed the night before. Now Joseph held his dead dream in his arms. He hadn’t signed up for this. This wasn’t in the fine print. What a failure. What a waste.

But Joseph still showed up.

Joseph asked for Jesus’ body. It wasn’t forced upon him. He experienced the burden of it by his own choice…Who would ask for the heaviness of Christ?

The feelings of pain and hopelessness that often come with the burdens of mortal life are not signs of weakness or lack of faith. They are the feelings of Christ’s disciples the day before his glorious return.

In anticipation of this Easter Sunday, perhaps we should take a moment to reflect on awkward Saturday.