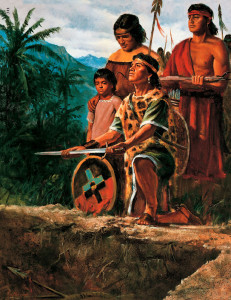 The Book of Alma includes a striking story of pacifism. When faced with military attack, the Anti-Nephi-Lehies decided to bury their own weapons rather than defend themselves. (On an unrelated note, the fact that they have their own Wikipedia entry proves the Book of Mormon is  true.) Their pacifism is a marked contrast to the militarism described throughout much of the Book of Mormon, and it drives from their violent history before they were converted:

6 Now there was not one soul among all the people who had been converted unto the Lord that would take up arms against their brethren; nay, they would not even make any preparations for war; yea, and also their king commanded them that they should not…

11 And now behold, my brethren, since it has been all that we could do (as we were the most lost of all mankind) to repent of all our sins and the many murders which we have committed, and to get God to take them away from our hearts, for it was all we could do to repent sufficiently before God that he would take away our stain—

12 Now, my best beloved brethren, since God hath taken away our stains, and our swords have become bright, then let us stain our swords no more with the blood of our brethren.

13 Behold, I say unto you, Nay, let us retain our swords that they be not stained with the blood of our brethren; for perhaps, if we should stain our swords again they can no more be washed bright through the blood of the Son of our great God, which shall be shed for the atonement of our sins.

The talk of stains is, I think, misleading. The central message to me is that the hatred and animosity necessary for dealing out violence had been removed from their hearts. They were full of love, and they treasured that love more than they treasured their own survival. Perhaps others could take up a sword to defend family and home and maintain a sense of humanity, but these warriors could not. I believe that they were afraid that in the heat of battle ideals of self-defense would give away to bloodthirsty habits, and they would lose themselves.

It reminds me of a friend who spent a lot of his teenage years away from the Mormon lifestyle. Before his 20s, he made serious life changes and worked hard to drop his old habits. I remember in one conversation he talked about how the consequences would never truly go away, however. Rock concerts, for example, were something he could never again enjoy. For other people it might be about fun and music, but for him the strongest associations were for drugs. And he didn’t want to risk digging those addictions up.

It all reminds me of Alcoholics Anonymous. I don’t know much about 12-step programs, but I do know that they believe you never stop being an alcoholic even if you do stop drinking.

And outrage, I believe, is also a drug. 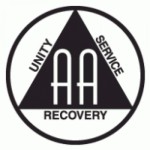 I think if you look around it’s not hard to see that this is true. Political junkies are addicted to it. There’s an intense rush that comes from knowing that you are part of some epic struggle against injustice, of knowing that you stand tall for virtue and goodness against dark and dangerous forces that threaten the vulnerable and oppressed. Riding around your high horse on the moral high ground turns out to be, well, a high. Every news article, every current event, every quote from politicians from the wrong party, is just a chance to score another hit. And, the second you find one, you share it with your friends. Sites like DailyKos and Drudge provide a virtual contact high: one juicy hyperlink is enough to get you going. Soon the entire World Wide Web becomes nothing but a vehicle to get your next fix.

I don’t know if we’re all addicts, but I believe a lot of us are. I know I am.

From the time that I got on my first messageboard in 1999 (I know, not early enough to give me serious Internet cred) until just a few years ago, I saw posting primarily as a religious crusade. I picked the nickname “theStorminMormon” as a joke at first, but once I started running into a deluge of animosity directed at my faith, I doubled down and never looked back. Arguing about politics and philosophy became my raison d’etre, and I invented a whole slew of justifications for whacking everybody who seemed out of line with the Stick of Rhetoric and the CAPS LOCK OF ANGRY DOOM. Until, one day, the weight of all that ugliness just got to heavy, and I finally started looking for new ways to talk to people.

I wouldn’t say I buried my weapons that very day, but I at least dropped them, and over the intervening years they’ve been reclaimed by a tangle of wild growth. When I reach for them, I find them alien and menacing and difficult to pry from their resting place.

On Friday I got into a discussion with my coworkers about music and why I thought a particular famous band was worthy of scorn for failing to live up to their musical potential. I made good points, from a strictly intellectual stance, and I cited some principles that I truly believe in, but along the way I was pretty viciously assaulting something that a lot of people love.

It left me cold. I was unsettled at the time, I was pre-occupied after lunch, and hours later on the way home I couldn’t shake this ugly feeling that I’d done something wrong. It was like there was a shadow over all my thoughts.

It wasn’t until last night, driving back up to DC, that I finally put the pieces together. Then I realize what the problem was: I’d fallen off the wagon. And, with my past, I just can’t afford to do that.

I believe now that the only way to talk productively about controversial issues is to avoid direct attacks and try to speak positively of alternatives. Spend less time tearing down what you think is wrong (ideally: none) and more time discussing and enacting what you think is right (ideally: all). I came to this from a simply pragmatic view (people aren’t very open to dialogue when they feel personally attacked), but I believe now it’s much more than that. No matter how gently executed or well-intentioned, attacking something someone else believes is an act of violence. Not all violence is wrong, but some of us have more reason to be cautious about that then others.

So you know what? My critics are right. This whole epistemic humility is going to take the wind out of a lot of sails. It will diminish conviction and weaken resolve. And that’s OK. Right now we’re in a society that’s pumped up on steroids when it comes to a sense of moral outrage, and a little bit less is exactly what we need.

I still feel plenty of passion. I am more driven now than at any point in my life, and I do my best to be able to participate in the distributed cultural chaos that, through a million conversations and arguments, steers the course of our society. And if, along the way, I have to take it on the chin once or twice when someone goes after something I say using the rhetorical streetfighting I used to practice so well: so what? It’s just really not much of a sacrifice all, considering the origin of my metaphor:

20 And it came to pass that their brethren, the Lamanites, made preparations for war, and came up to the land of Nephi for the purpose of destroying the king, and to place another in his stead, and also of destroying the people of Anti-Nephi-Lehi out of the land.

21 Now when the people saw that they were coming against them they went out to meet them, and prostrated themselves before them to the earth, and began to call on the name of the Lord; and thus they were in this attitude when the Lamanites began to fall upon them, and began to slay them with the sword.

22 And thus without meeting any resistance, they did slay a thousand and five of them; and we know that they are blessed, for they have gone to dwell with their God.

All I have to fear, on the other hand, are some mean words on Facebook. I think I’ll learn to cope.