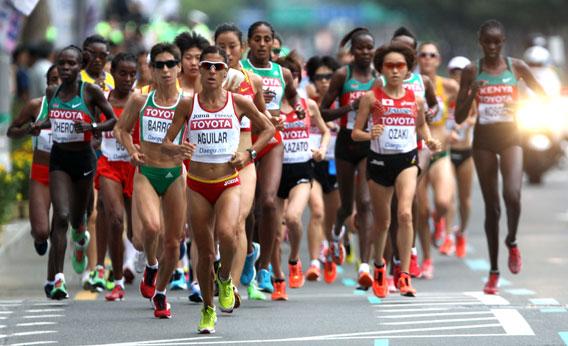 Inflammatory headline? Of course. But David Stipp makes a compelling case at Slate:

There’s no denying it—our kind started substituting brains for brawn long ago, and it shows: We can’t begin to compete with animals when it comes to the raw ingredients of athletic prowess. Yet being the absurdly self-enthralled species we are, we crowd into arenas and stadiums to marvel at our pathetic physical abilities as if they were something special. But there is one exception to our general paltriness: We’re the right honorable kings and queens of the planet when it comes to long-distance running.

Stipp cites a couple of man-vs-horse marathons where humans actually win. There’s one in Wales and another in Arizona. He also gets into the biophysical mechanics of human long-distance running (everything from counter-rotating torsos to advanced heat dissipation) that enable us to maintain much higher speeds over long distances (especially in warm and temperate climates) than the closest competitors.

This whole idea that humans are evolved runners really resonates with me, and it’s actually reinforced my own desire to run longer and longer. I’m not very good yet (10 miles is my longest run), but the longer I go the more I feel like “Yeah, this is how it’s supposed to be.” It just feels right.

The Guardian reports that the UK government is using anti-terrorism laws to intimidate citizens with no evidence that they are in any way connected to terrorism. Officers at Heathrow recently stopped an individual, David Miranda, whose domestic partner happens to be Glenn Greenwald, the man who interviewed whistleblower Edward Snowden and published articles about the NSA’s spying programs. The officers held Miranda for nine hours (the maximum allowable time period) and confiscated thousands of dollars of his personal affects. “Suspects” detained under this provision of the UK’s Terrorism Act (called “Schedule 7”) are compelled to cooperate with questioning or risk being arrested for “obstruction.”

Make no mistake, this is not diplomacy. This particular law has been on the books in the UK since 2000. It’s been suggested, with good reason, that most of its victims are racially profiled–that they “look” like terrorists. The detention of David Miranda was not naive racism by ignorant cops who should know better, it was intimidation, pure and simple. It was abuse of power for the purposes of cowing those who might dare threaten the very power being abused. We have every reason to be gravely concerned.

The picture to the left was the cover of Ruskin on Himself and Things in General, a late 1800s collection of essay extracts by John Ruskin. The white, bearded, thin-faced Ruskin tramples his dark, broad-faced and flat-nosed enemy. In the slain man’s hand is a bag that reads “Wealth of Nations” and “L.S.D.” (not the drug, but the abbreviation for “pounds, shillings, and pence”). Next to him is a book titled “The Dismal Science.” How does the “dismal science” connect with this obvious racism? Most know that economics got its unfortunate nickname from Thomas Carlyle, who coined the phrase based on Malthus’ population doomsdaying. However, this well-known story is simply not true. As economists David Levy and Sandra Peart explain,

[Thomas] Carlyle’s target was not Malthus, but economists such as John Stuart Mill, who argued that it was institutions, not race, that explained why some nations were rich and others poor. Carlyle attacked Mill, not for supporting Malthus’s predictions about the dire consequences of population growth, but for supporting the emancipation of slaves. It was this fact—that economics assumed that people were basically all the same, and thus all entitled to liberty—that led Carlyle to label economics “the dismal science.”

Carlyle was not alone in denouncing economics for making its radical claims about the equality of all men. Others who joined him included Charles Dickens and John Ruskin. The connection was so well known throughout the 19th century, that even cartoonists could refer to it, knowing that their audience would get the reference.

Perhaps capitalism has more to do with emancipation than exploitation.

Rabbi Perry Tirschwell wrote an interesting comparison of Mormons and Jews in the Jewish Press yesterday. Ever since Orson Hyde dedicated the Holy Land and prophesied about the Zionist movement, Mormons have had a vested interest in witnessing the restoration of the Jews’ place in the world. It should be clear, though, that Latter-day Saint Church leaders are on record in expressing love for towards both Jews and Muslims, lest people think we’re taking a side in certain Middle-East conflict. The late Mormon president/prophet Howard  W. Hunter said in his excellent 1979 address “All Are Alike Unto God”:

As I looked around the movie theater last weekend in Scottsdale, AZ, it was pristinely clear that Austenland had attracted its target audience. The estrogen in the theater was potent, with only a few sparse men present, attached to girlfriends or husbands. I was definitely the only man there who wasn’t with his female significant other. Despite that fact, I couldn’t have been happier to be there.

Now, granted, my wife Anne was originally supposed to come with me, but she ended up not being able to come (and will instead be attending this weekend with a group of women). But it says something about me that, despite that hiccup, I was still intent to go to the film by myself (not just so I could write the review, but because I was super excited to see it).  Blame it on my seven sisters, but, in my heart of hearts, I’d much rather watch Downton Abbey than the Superbowl. As a result of that brainwashing at the hands of my sisters, I’m very affectionate towards Regency/Victorian literature, BBC period dramas, black and white Jimmy Stewart films, and even a well made rom-com. Thus the new film Austenland, a tongue in cheek love letter to the hordes of Jane Austen fans that span the globe… well, it was right up my alley. 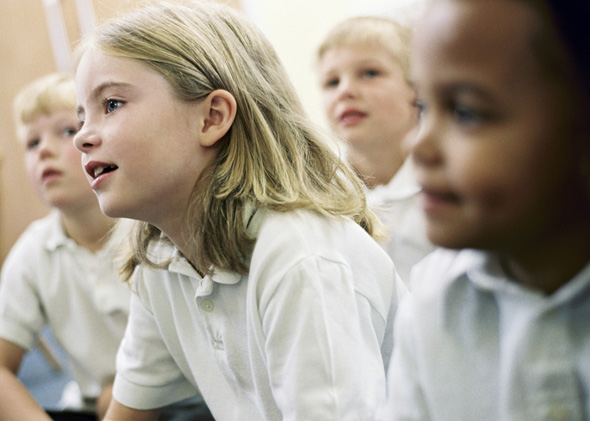 Allison Benedikt has a piece at Slate urging people to “not just acknowledge your liberal guilt—listen to it.” Specifically, Benedikt states that “you are a bad person if you send your children to private school.”

I’d like to give Benedikt credit for having good intentions. The problem is that nothing in her argument actually substantiates her blind belief that if all kids went to public school, then public schools would improve. She even acknowledges that the rich would cluster in rich neighborhoods and nothing could be done about it, but somehow inner city public schools would miraculously rebound anyhow.

How? Benedikt doesn’t say. I feel bad pointing it out, but Benedikt might have done a better job at stringing together a cogent argument if her own education hadn’t been so poor. That’s not a mean-spirited slam on my part. I just don’t know what else to take from a piece that fails to provide any rationale whatsoever for its core thesis, but does include statements like “I left home woefully unprepared for college, and without that preparation, I left college without having learned much there either.” along with an eyebrow raising claim that “getting drunk before basketball games with kids who lived at the trailer park near my house” is an equivalent experience to reading Walt Whitman. Maybe if Benedikt had ever read Whitman, she would be qualified to weigh in on that, but since she claims to have hardly read any literary books ever I’m not sure why she thinks anyone would be interested to her opinion on the topic.

In the meantime, my kids don’t go to private school because my wife and I are rich and it’s a status symbol or class affectation. We stretch our budget to the breaking point to afford their tuition (and go without things like a second car) because we don’t want them to have to relive experiences like the vicious bullying I endured or the rampant sexism my wife survived. If you want us to risk putting our kids through that, you’ll have to do a damn site better than this as an argument. I’m guessing Benedikt doesn’t actually have kids, or she would understand that.

At the end of the day, the sad irony is that Benedikt’s piece is so terribly reasoned it is a stark warning against sending your kids to public school. If you do, they may end up writing nonsense like she does.

So far the best report I’ve found on the mess that is Syria comes from, surprisingly, an opinion piece at CNN.  In it Peter Bergen reminds us that

Whoever ultimately prevails in this fight is hardly going to be an ally of the U.S. It’s an ungodly mess that makes even Iraq in 2006 look good. It is, in short, a problem from hell.

Bergen also discusses the complex legal issues of America entering the fight in Syria and the fact that we’re essentially guaranteed to enter at this point.

Another piece from The Independent brings in the fact that we’ll be fighting against al-Qaeda in Yemen and Pakistan, but with them in Syria.  It doesn’t even mention that fact that we took out al-Qaeda’s leader just two years ago.  It will be interesting to see if the we were on the same side but didn’t directly give weapons controversy will play out again.

There’s a stunning comic at ZenPencils that splices together text from a commencement speech Bill Waterson gave in 1990 with new, original artwork intentionally mimicking the beauty of Calvin and Hobbes.

The art and text are an incredible and thoughtful call to a life of independent, existential creativity. If you don’t feel a deeper drive to live life fully after reading this, you’re probably beyond all help.

Here are the first few panels. 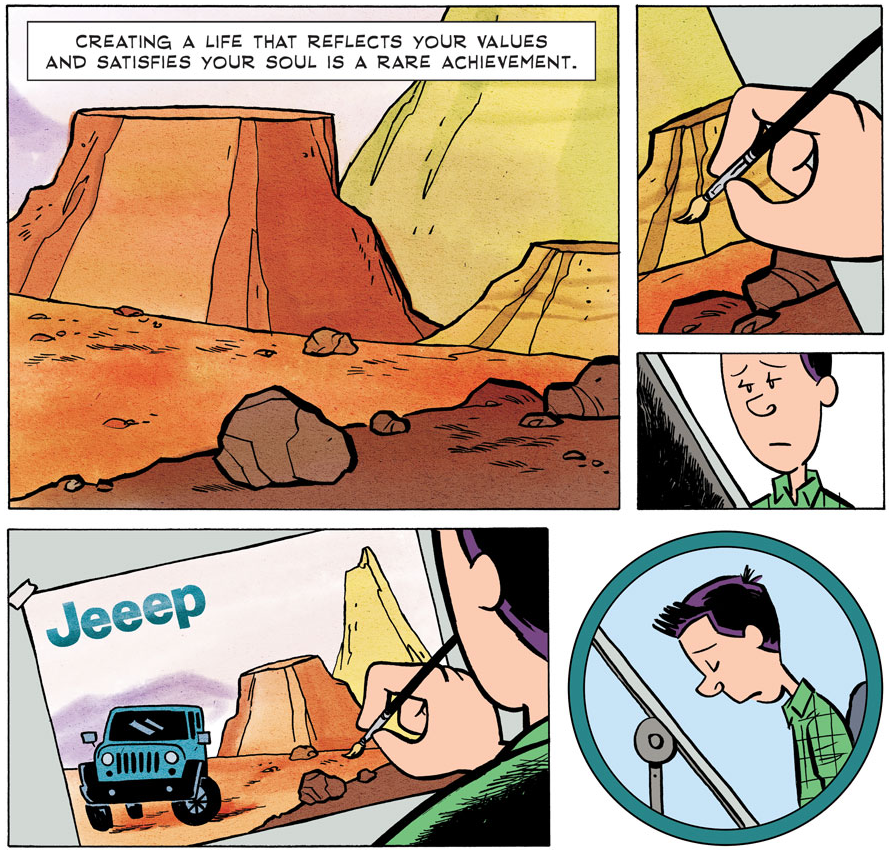 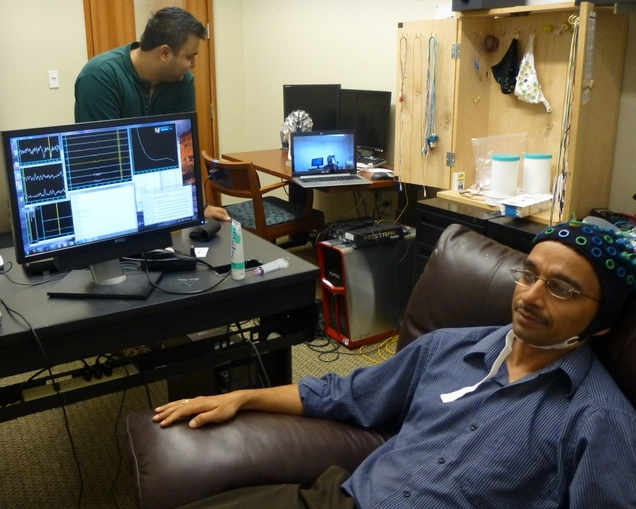 Rajesh Rao, a professor at UW who has worked on brain-computer interfacing for more than a decade, looked at a screen and had to fire a cannon to shoot down an enemy plane while avoiding friendly planes. On the other side of campus, Andrea Stocco had the keyboard to execute those commands, but couldn’t see the game itself. But using their brain-to-brain interface, Rao imagined that he was using his right hand to click the space bar on a keyboard — and Stocco’s right hand carried out the command without any conscious movement on his part. Stocco likened it to an involuntary twitch or a nervous tic.