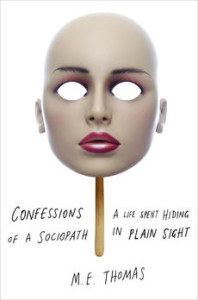 I read a very odd piece in Psychology Today that purports to be written by a “diagnosed sociopath”. Psychology is well outside my area of expertise, but I’m not sure if that matters because the author seemed to be relying much more heavily on Hollywood notions of sociopathy than the DSM’s definition of antisocial personality disorder. According to Hollywood, sociopaths are amoral (correct), manipulative (fairly correct), and brilliant (not necessarily). They villains around which plots revolve and who inspire heroes to come forth and do battle, so they’re sort of a big deal.

But M. E. Thomas is no supervillain. There was this one time that she followed a guy and fantasized about strangling him, but then she lost him. Not really how big a threat that ever was, because she had no weapon, no physical advantage, no training, and not even a plan. Oh yeah, and like I mentioned, she couldn’t even manage to keep up with him. So how, exactly, was she going to overpower him and strangle him to death? Also, there was this time she was so sarcastic to her dad that he put his hand through a wall. While it’s not exactly Andy Griffith’s Mayberry, it’s hardly American Pysho, either.

I understand that a main point she’s making is that not all sociopaths are violent criminals. Some are just a-holes. OK, point made. But… why would I read a book about that? A memoir has to either have interesting events or an interesting person, but M. E. Thomas evidences neither.

The only reason I was prodded into writing this post is the following:

The Church of Jesus Christ of Latter-day Saints is a sociopath’s dream. Mormons believe that everyone has the potential to be godlike—I believe this includes me. Every being is capable of salvation; my actions are what matters, not my ruthless thoughts, not my nefarious motivations. Everyone is a sinner, and I never felt that I was outside this norm.

See, this is when I knew that M. E. Thomas is seriously deficient in the practical intellect department. The idea that a sociopath is cut out for “potential to be godlike” in a religion that defines God in terms of His empathy is ridiculous to the point of genuinely sad. Don’t get me wrong: I’m not trying to pass judgment on her moral worth. Not my department. But the fact that she’s advancing such a ludicrous argument shows how completely out of touch she is. I’m not sure to what extent “delusions of grandeur” or “narcissism” play a role in sociopathy, but those are the only traits where’s she’s nailing perfect 10s.

But it’s just too delicious of a quote for anti-Mormons to pass up, especially because it summons up some additional bogeymen. She’s got the noxious idea that Mormons believe we earn salvation through our works and also the fun stereotype that we’re a superficial bunch obsessed with behavior and outward appearances and completely immune to moral introspection. Neither is true, but both will please those who already have an axe to grind, and  so I’m fairly confident I’ll be seeing the “sociopath’s dream” quote on an image in my Facebook feed eventually. (Hey, at least it will add some variety.)

In any case, I just don’t believe that articles like this one are really going to move copies of the book. It’s got the subtitle: “A life hiding in plain sight”, but I don’t think there’s anything “hidden” about non-violent sociopaths. I think we all know who they are. We just have a different word for them. We call them assholes.

7 thoughts on “Self-Proclaimed Sociopath: Look How Special I Am!”