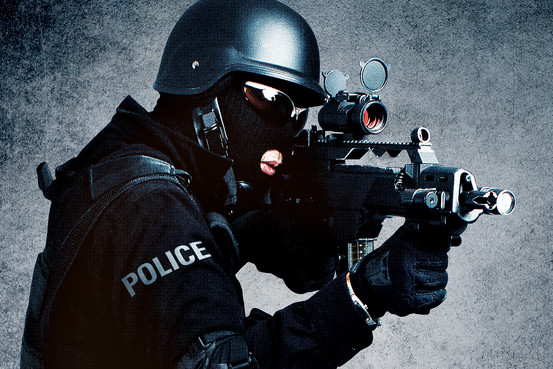 The Wall Street Journal ran an article called The Rise of the Warrior Cop on July 22 about the militarization of ordinary police forces. The problem–and it is a problem–has to do with the proliferation of SWAT-style police units:

The country’s first official SWAT team started in the late 1960s in Los Angeles. By 1975, there were approximately 500 such units. Today, there are thousands. According to surveys conducted by the criminologist Peter Kraska of Eastern Kentucky University, just 13% of towns between 25,000 and 50,000 people had a SWAT team in 1983. By 2005, the figure was up to 80%. The number of raids conducted by SWAT-like police units has grown accordingly. In the 1970s, there were just a few hundred a year; by the early 1980s, there were some 3,000 a year. In 2005 (the last year for which Dr. Kraska collected data), there were approximately 50,000 raids.

If you want an idea of how absurd this is consider that the Fish & Wildlife Service, NASA and the Department of the Interior each have their own SWAT-style unit. Why does NASA need a military-grade police unit? Your guess is as good as mine, but I wonder if the overall trend has to do with the fact that the United States congress has not issued a formal declaration of war since 1942. So we’ve had armed conflict in Korea, Vietnam, Grenada, Panama, Iraq, Afghanistan, and then Iraq again all without a formal declaration of war. We’ve also got a war on drugs, war on poverty, and a war on terrorism. And yet we haven’t had enemy armed forces on our soil in about 150 – 200 years (depending on how you count the American Civil War).

It seems pretty clear that Americans have forgotten what war is, and what the real costs are. This might seem outrageous, given the death toll our young men and women currently face in the Middle East, but that’s actually just my point: outside the military who is really effected on a day-to-day basis? No one. Now that President Obama is overseeing the conflict the anti-war movement has evaporated back into the woodwork and casualty figures are no longer headline news as they were in the past. As far as Americans are concerned, war is something that happens in other countries to other people.

But if that seems a little abstract, how about this story: 13 Wisconsin officials raid animal shelter to kill baby deer named Giggles. A concerned family had  brought the fawn to the no-kill shelter because they were worried that it had been abandoned by its mother, but state law prohibits keeping wild animals, and so a bunch of over-armed police showed up with a warrant and no warning to keep Wisconsin safe from baby deer:

“I said the deer is scheduled to go to the wildlife reserve the next day,” Mr. Schulze told the station. “I was thinking in my mind they were going to take the deer and take it to a wildlife shelter, and here they come carrying the baby deer over their shoulder. She was in a body bag. I said, ‘Why did you do that?’ He said, ‘That’s our policy,’ and I said, ‘That’s one hell of a policy.’”

Yup: nothing demonstrates the wisdom of Department of Natural Resources having their very own SWAT team like the need to raid animal shelters and execute baby animals before they can be delivered to a wildlife reserve.

I know I feel safer. Don’t you?