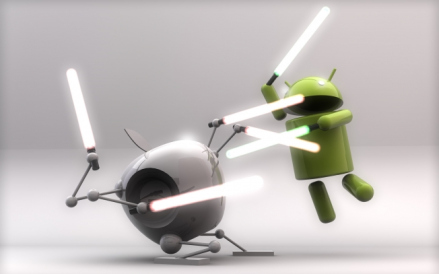 A few years ago a consortium of tech giants bought several thousand patents from a failing telecom with, it appears, the express purpose of using them to hurt their biggest competitor. Counting amongst its members Apple, Sony and Microsoft, this coalition of corporations has allied together to use standard patent troll tactics in a bid to use these Nortel patents against Google and Google’s wildly popular Android mobile operating system, as well as several companies that build Android-based devices. At the time the patents went up for auction in 2011, Google saw what was going to happen and tried to purchase the patents itself, but was unable to pony up more dough than were the collective resources of some of the largest and richest companies in the history of the world.

So, now, instead of attempting to simply compete directly with Google, these companies, under a “plausible-deniability” shell company called Rockstar, are going to try to use the government to put the brakes on one of the biggest tech success stories of the modern age. In using purchased-patent warfare and filing their suit in the patent-friendly Eastern District of Texas, these tech giants, through Rockstar, are essentially conceding that they cannot best Google in the eyes of the consumer and must instead appeal to the failed and broken US patent system using the bogus framework of software patents to continue to pour more money into the pockets of their executives and shareholders.

It’s ridiculous, and it enrages me. The patent system exists ostensibly for the purposes of disclosure of invention. It is, at least theoretically, about information, and its dissemination into society. There is an agreement between the patent applicant and the patent office that the applicant will disclose the details of his or her invention (which encourages further innovation from other parties) and the patent office will grant certain rights to claim exclusivity (which is the incentive to invent and disclose). This pushes people to do work in fields that has not yet been done rather than “reinvent the wheel,” forcing them to license what has already been done if they want to utilize it in their own developments. In practice it is being used by attorneys and corporations to shake down anyone within reach, particularly the “little guy” without the resources to fight a protracted legal battle, and to outlaw and siphon money from their competitors’ products. This directly contracts the number of useful inventions and promotes the proliferation of useless inventions which exist only for purposes of litigation. As soon as a legal or social institution becomes the means to do the exact opposite of what it was meant to accomplish, it’s due an overhaul, if not demolition and reboot.

There are a few rays of hope, though. New Zealand, hopefully serving as an example of rationality in the world of patent insanity, recently outlawed software patents, with the European Union continuously debating similar action. I wouldn’t be surprised if we started to see more and more startups moving to software-friendly (ie, anti-software patent) nations in hopes of protecting themselves against the trolls looking for a government-mandated tribute.

In the past couple years we have seen increasing and heartening efforts from Congress and even Obama himself, most recently in the form of a bipartisan bill which looks to make a serious dent in the economic damage wrought by patent trolls every year. While that bill may not affect the impending Google vs. Rockstar war, it’s good to see our government is finally acknowledging there is a problem, and finding ways to do something about it.