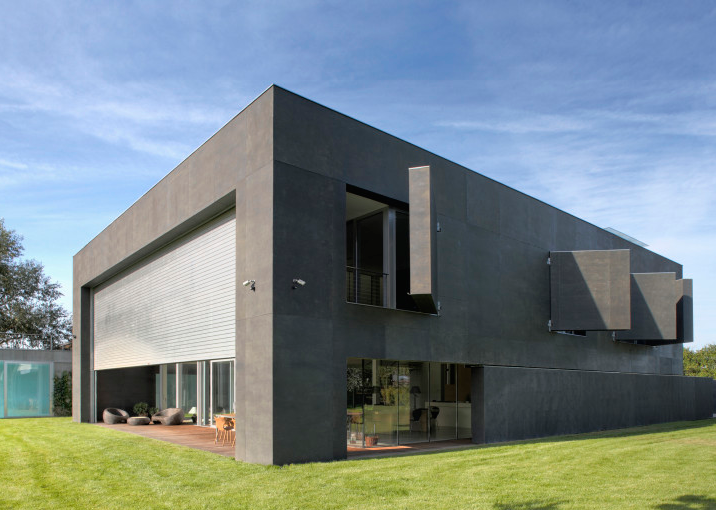 Consider this interesting house, which I found out about from a ViralNova story on Oct 26. The ViralNova story mentioned zombies (a lot) and depicted the home as some kind of prepper-bunker: “The fortress is virtually indestructible. Thieves, rioters and even an army couldn’t get in once you lock up.” Why is it indestructible? Because it’s obviously built of solid steel right? Err… no.

I was interested enough that I did some light research and found an older Techeblog article (from 2012) that featured the same house with basically the same motif: zombies. The article claimed the house was “impenetrable to just about anything short of missiles / bombs.” Based on what? I have no idea. They posted a YouTube video of the designer explaining his creation, and he didn’t mention a single thing about zombies. He did mention the construction of the house, however. The longest moving wall is built on a steel truss, but that’s just the internal skeleton. The outer layer is light-weight wood, and it’s filled with “mineral wool” for insulation. None of that is remotely “indestructible”, but then again the Techeblog article mentions “a guesthouse, complete with floor-to-ceiling windows.” when it’s actually an indoor pool. Clearly they didn’t watch the video that they posted on their own site.

The thing that’s both sad and annoying is that the actual explanation of the home’s intent is far more interesting than ridiculous claims about rocket-proof walls or zombies. The designer has a fascinating take on the idea of organic construction. Instead of stereotypical rounded edges, it’s the function rather than the form of this building that makes it organic. It is designed to open like a flower every morning to let in the sun’s energy, and then close at night to conserve that energy. Security is a feature, yet, but it’s not the most interesting or important aspect of the building.

Armed with the name of the firm that designed the building, I found their own description of their work. I’m glad I did, because they have several other interesting concepts. Call me weird, but learning about modern architectural theories was much more interesting than the silliness in the original articles.

I know, I know. I’m a grumpy old man yelling at the kids to get off my lawn. I get it. But there’s a simple point I still think is worth getting grumpy about. The world is interesting enough as it is without lazily applying your preconceived notions to it. Yes, the home’s slate-gray coloring make it look intimidating and fortress-like, but digging deeper reveals a more interesting story. I know that ViralNova and Techeblog aren’t overly concerned with credibility or veracity, but hey: I am.

So I took the time to look up the real info, write it here, and I hope y’all enjoy learning about the home and the designer’s philosophy and seeing their other buildings as much as I did.