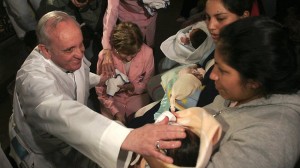 Naturally, the Pope’s words are being and will be co-opted by the left as a long-awaited attack against conservative ideals and a tacit approval of redistributive policies, not excluding socialist positions.

While I can’t, myself, read the Pope’s document (my guess is because it hasn’t been translated to English), reading what’s being said in the news about it leads me to believe Pope Francis is not sanctioning socialism or anything like it, but rather calling for society to back away from “idolatry” in the form of obsession with wealth and status, which isn’t what I would consider to be an earth-shattering pronouncement. He asks for people to make giving to those less fortunate than themselves a priority, and for politicians to ensure everyone in their society has access to what most people around the world would consider to be basic necessities (education, employment and health care).

Perhaps the most potentially divisive comment made in the exhortation is, ironically, the Pope’s call for closing the inequality gap. I’m not sure what solutions he offers for fixing that problem, but it’s perhaps what the Pope points to as a cause for the gap’s existence that is the most interesting:

“As long as the problems of the poor are not radically resolved by rejecting the absolute autonomy of markets and financial speculation and by attacking the structural causes of inequality, no solution will be found for the world’s problems or, for that matter, to any problems,” he wrote.

I don’t think many people are seriously arguing for absolutely unregulated markets, so I’m not sure what this statement is meant to accomplish, nor why it is (at least, going from the comments sections on the various outlets reporting this) being interpreted by leftists as a socialist call-to-arms and a radical departure from everyday Christian culture which, with its emphasis on personal liberty, responsibility and autonomy, is in their minds a spiteful dismissal of or, at best, indifference to the plight of the disenfranchised.

While I applaud Pope Francis’ for attempting to place emphasis on helping the less fortunate and shedding the pursuit of wealth at the expense of others, I’m more interested in learning what solutions he proposes to addressing what are, in fact, human failings, not unique to any corner of any political spectrum.