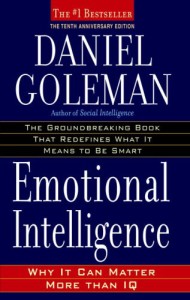 Wheaton professor Adam Grant has an interesting article in The Atlantic on “The Dark Side of Emotional Intelligence.” Psychologist and author Daniel Goleman has popularized the term since the 1990s (along with social intelligence). Goleman’s research helped establish that traits other than IQ can lead to success in organizations and individual lives. But just as impressive cognitive abilities can be used for immoral purposes, so can a strong handle on emotions. Grant points to emerging research that found “when a leader gave an inspiring speech filled with emotion, the audience was less likely to scrutinize the message and remembered less of the content. Ironically, audience members were so moved by the speech that they claimed to recall more of it.” Futhermore, “when people have self-serving motives, emotional intelligence becomes a weapon for manipulating others.” Other experts found “emotional intelligence helps people disguise one set of emotions while expressing another for personal gain.” While these findings may not be surprising, a comprehensive analysis of emotional intelligence literature revealed something that might be:

In jobs that required extensive attention to emotions, higher emotional intelligence translated into better performance…However, in jobs that involved fewer emotional demands, the results reversed. The more emotionally intelligent employees were, the lower their job performance. For mechanics, scientists, and accountants, emotional intelligence was a liability rather than an asset. Although more research is needed to unpack these results, one promising explanation is that these employees were paying attention to emotions when they should have been focusing on their tasks.

Grant concludes, “Thanks to more rigorous research methods, there is growing recognition that emotional intelligence—like any skill—can be used for good or evil. So if we’re going to teach emotional intelligence in schools and develop it at work, we need to consider the values that go along with it and where it’s actually useful.”