Discussions regarding Jesus’ marital status have become quite popular over the past few years. Unfortunately, it had nothing to do with any real familiarity of Gnostic writings (the Gospel of Philip is typically the one invoked) and more to do with The Da Vinci Code. 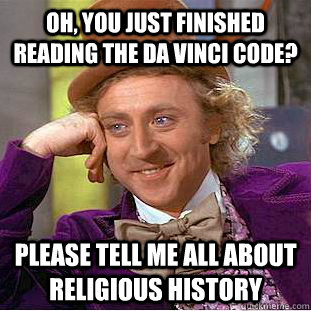 However, a controversial papyrus scrap reads “…’Jesus said to them, ‘My wife…” Recent tests on the papyrus’ ink and writing have dated it between the 5th and 9th century A.D. The results have been published in the April 2014 issue of Harvard Theological Review. While far removed from 1st-century Christianity, the text nonetheless is insightful. “Early Christians were grappling with the question of whether you should get married and have children, or whether it’s better to be celibate and virgin,” the study’s author Karen King told The Atlantic. “This fragment seems to be the first case we have where a married Jesus appears to be affirming that women who are mothers and wives can be his disciples.”

Be sure to check out National Geographic‘s coverage and Christianity Today‘s interview with Wheaton professor Nicholas Perrin about the fragment.