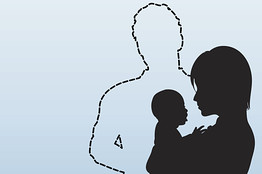 A recent article in the Wall Street Journal tackles the relation between family breakdown and inequality. The authors write,

The two-parent family has declined rapidly in recent decades. In 1960, more than 76% of African-Americans and nearly 97% of whites were born to married couples. Today the percentage is 30% for blacks and 70% for whites. The out-of-wedlock birthrate for Hispanics surpassed 50% in 2006. This trend, coupled with high divorce rates, means that roughly 25% of American children now live in single-parent homes, twice the percentage in Europe (12%). Roughly a third of American children live apart from their fathers.

The authors continue by pointing out that even “children in high-income households who experienced family breakups don’t fare as well emotionally, psychologically, educationally or, in the end, economically as their two-parent-family peers. Abuse, behavioral problems and psychological issues of all kinds, such as developmental behavior problems or concentration issues, are less common for children of married couples than for cohabiting or single parents, according to a 2003 Centers for Disease Control study of children’s health. The causal pathways are about as clear as those from smoking to cancer.”

The authors (both researchers in the Department of Education Reform at the University of Arkansas) continue to list studies linking family structure to economic outcomes. Yet, academic conferences tend to denounce “free markets, the decline of unions, and “neoliberalism” generally as exacerbating economic inequality” with little attention being given to family structure. The authors suggest that ideology, the risk of the accusation of racism (“family breakup has hit minority communities the hardest”), and the lack of a “quick fix” deter academics from pursuing this line of thought.

The authors conclude, “The change must come from long-term societal transformation on this subject, led by political, educational and entertainment elites, similar to the decades-long movements against racism, sexism—and smoking. But the first step is to acknowledge the problem.”