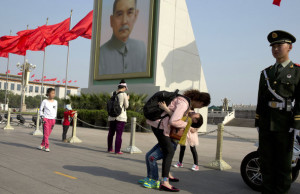 Hugs are on the rise in China. The physically reserved Chinese culture is apparently changing “due to exposure to the West, especially huggy North America,” reports The New York Times. Sixty schools in the Liuhe District in Nanjing now have emotional intelligence classes. “The third graders’ homework: Hug your parents tonight.” It turns out that “other Asian nations — even formal Japan — may also be involved, according to a recent article in China Daily headlined ‘‘Students Use Hugs to Ease Tensions.” It described ‘‘hugging activities’’ between a group of Japanese studying in Beijing and Chinese passers-by, in which the students hugged about 200 Chinese in an effort to warm feelings between people of the two nations sparring over territory in the East China Sea.”

An interesting shift in culture. Check it out.