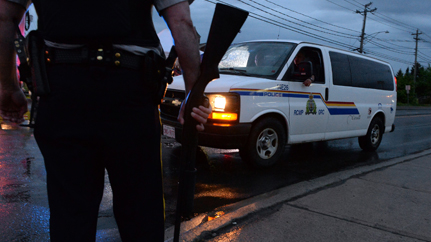 About two weeks ago, a killer in New Brunswick killed three Royal Canadian Mounted Police and left two more in critical condition. Sun News Network covered the story closely, but in a way that is very different from what the American mainstream press does in similar situations: they refused to release the name or the photo of the killer. They then published an editorial explaining their decision.

Far more people have been killed in the bad neighbourhoods of Chicago than were killed in all the mass shootings combined. But these rare incidents are never forgotten. And with the rise of social media, they’ve become a spectacle… Following the deadly Newtown, Connecticut shooting in December 2012 that left 26 dead, including 20 children, it was discovered that the perpetrator kept a “score sheet” of previous mass shootings. Did he hope his name would be placed at the top of the list?

The theory that publication of mass killings leads to more mass killings is very hard to study empirically because mass killings are so rare, but copycat suicides provide a plausible basis for the fear. In copycat suicides, a well-publicized suicide sparks a wave of imitation suicides. This is a very old phenomenon, with the first notable example dating to the 1774 publication of The Sorrows of Young Werther. Because of this well known effect (called suicide contagion) many news agencies around the world place limitations on the amount of publicity they will give to suicides.

I would like to see similar levels of self-restraint–on the part of news agencies and us, the audience–here in the US. The sad reality is that it’s only a matter of time until we have the opportunity to put it into practice. I do not think that such self-censorship would end mass shootings overnight, but I do think that it could help. And that it’s the least we can do.