Marriage historian Stephanie Coontz has an interesting piece in The New York Times on rising family instability. Commenting on male and female wages, she states, 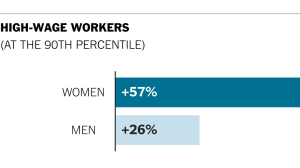 Today, job prospects for young men are far less favorable. Real wages for men under age 35 have fallen almost continuously since the late 1970s, and those with only a high school diploma have experienced the sharpest losses. Between 1979 and 2007, young male high school graduates saw a 29 percent decline in real annual earnings — an even steeper decline than the 18 percent drop for men with no high school diploma…Women’s wages, by contrast, have risen significantly since the 1970s, except for those on the very bottom…Meanwhile, women’s expectation of fairness and reciprocity in marriage has been rising even as men’s ability to compensate for deficits in their behavior by being “good providers” has been falling. Low-income women consistently tell researchers that the main reason they hesitate to marry — even if they are in love, even if they have moved in with a man to share expenses, and even if they have a child — is that they see a bad marriage or divorce as a greater threat to their well-being than being single.

If women lowered their expectations to match men’s lower economic prospects, perhaps marriage would be more common in low-income communities. But it would most likely be even less stable, and certainly less fair. Turning back the inequality revolution may be difficult. But that would certainly help more families — at almost all income levels — than turning back the gender revolution.

This piece goes nicely with a recent review in The Wall Street Journal by sociologist and National Marriage Project director W. Bradford Wilcox, in which he points out,

Although the authors put too much stress on economic explanations-their approach cannot explain, for instance, why the economic dislocation of the Depression did not result in high levels of family breakdown in the 1930s-the story told by “Marriage Markets” is worth heeding, whatever one’s political affiliations. Conservatives need to take note of the growing family divide in part because fragile families require more public aid, from Medicaid to food stamps: As marriage goes, so goes the tradition of limited government. Progressives, for their part, might well worry that the family divide begets not only economic disparity but also gender inequality. After all, communities where fathers are largely absent from their children’s day-to-day lives do not come close to approximating the egalitarian ideal championed by today’s left-of-center thinkers and activists.

…What, then, is to be done? Ms. Carbone and Ms. Cahn offer a number of good suggestions, such as job-relocation grants for laid-off workers (to help them move away from high-unemployment regions to those with jobs) and portable health plans that allow workers to seek out the best job opportunities instead of clinging to bad, low-paying jobs for the sake of their benefits.

But the authors also think that the way forward requires strategies designed to “enhanc[e] women’s power”-such as “improved access to contraception.” …Perhaps. But a stronger case could be made that the bigger challenge facing working-class and poor families is not a lack of female empowerment but rather that contemporary masculinity has been decoupled from work, fatherhood and marriage-and for reasons that are not entirely economic.

Good stuff. Check them out.