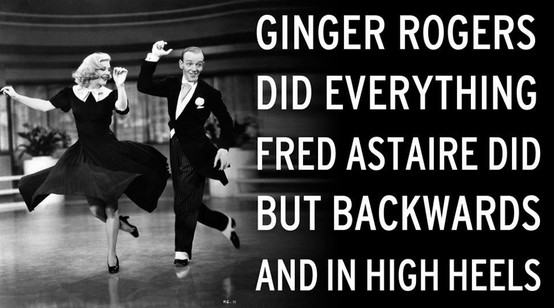 Just came across a blog post by Patrick Rothfuss that made me a little sad. Here’s the relevant portion:

Today Oot came up to me and asked me if I’d like to play a game.

“Oh you know,” he explains, sounding very matter-of-fact. “A guy game. Because we’re both guys.”…

[T]his stuff is insidious… This constant, low-grade sexism is everywhere. It sneaks in.

I’m skipping some text, but it really is the case that Rothfuss goes straight to sexism without any other statement from his son at all. A distinction is drawn between guy games and girl games and that alone is the basis for crying sexism.

So let’s get a couple of things straight. First: the presumption that any gender difference is a form of discrimination or sexism is pernicious. There really are differences between the sexes, and refusing to acknowledge those differences will hurt someone. Since I’m responding to a particularly extreme view, I can pick particularly easy examples to illustrate this point. If you deny physiological differences between boys and girls, then there’s no basis for girl- and boy-only versions of sports. No WNBA aside the NBA and no USWNST aside the USMNST. Obviously, in sports, denial of stereotypical differences would be mostly bad for girls. And, although there’s still controversy, an increasingly large number of people believe that denial of differences in education are mostly bad for boys. Wherever there are significant differences between male and female, and there are at least some such differences, denying those differences will do at least some damage to boys, girls, or both.

Second: a big motivator for calling out sexism is that doing so is a powerful cultural signifier. If you want to be popular with the right sort of people–and if the right sort of people are intellectual, progressive, etc.–then you write about sexism. There’s a cadre of sci-fi and fantasy authors in particular (Patrick Rothfuss, John Scalzi, Jim Hines, and Mary Robinette Kowal all come to mind) who regularly use their prominent blogging voices to personally weigh in on this issue. I’m sure that a lot of their motivation is genuine, but it would be foolish to ignore the role that displaying in-group status has. Meanwhile, it’s easy to find similar cadres of sci-fi and fantasy authors (notably Larry Correia) who do the exact same thing from the opposite end of the spectrum.1 It’s bad because it’s polarizing, and it’s downright creepy because of the overt religiousness of so much of the language. White male privilege is the new original sin:

It’s like trying to keep dust out of your house. You can do a lot, but ultimately, *you* are one of the main reasons there’s dust. You track it in on your clothes without knowing it. And even if you somehow managed to avoid that, you’d still shed skin cells. Even if you don’t want to.

Third, the fact that discussion of sexism functions so prominently as a means of expressing tribal loyalty means that there’s enormous pressure to discard nuance. Every instance of sexism you can find to write about in a poignant and self-aware way will raise your status. So there’s a strong incentive to (1) see sexism everywhere and (2) not think too critically about any given potential instance. People who think about these things in more detail will protest that I’m taking a kind of straw man because virtually no feminist who’s thinking and writing seriously about the issue is going to take the extreme position that there are no gender differences or that we should ignore the gender differences that exist. No one seriously wants to merge the USWNST and the USMNST, right? I get that. I’m not trying to paint all social liberals with the brush of this one blog post by a highly gifted author with (to my knowledge) no actual expertise or training in sociology, anthropology, women’s studies, etc. What I want to show, instead, is the way that potentially usefully sophisticated and productive critiques of society can be subverted by the gravitational pull of popularity.

Of course this applies to both sides of the political spectrum. There’s an incessant gravitational pull towards extremism the moment you declare an allegiance to a particular ideology. It becomes an arms race to see who can show they are more committed than their fellow partisans. It also ensures that opposed ideologies have a steady stream of prominent but incompetent spokespersons who constantly pump out a dumbed-down, inflammatory version of the ideology to keep the other side’s anger and righteousness sufficiently aroused. As someone who is staunchly conservative in their beliefs, I am in no way immune to these effects, but my hope is that writing about the non-partisan aspect of the question as I’ve tried to do in this post can suck some of the oxygen out of the partisan flamewar.

There is a fourth and last point, and it’s an important one. Nothing in this post should be construed in any way as an argument that Patrick Rothfuss is a bad person or a bad parent. The biggest reason for that is that judging him on such grand scale based on one blog post would be lunacy. I don’t know him personally, and even if I did I would still not have any basis for forming a judgment like that. Honestly, my impression of Rothfuss as person and parent based on that blog post is rather high. Parents always get a lot of things wrong. The most important thing we can do, I believe, is try sincerely to get it right. Rothfuss sounds like a father who is really trying, and I respect that immensely. I can say no better for myself. Besides, when all the angst was said and done, he went and played with his kid. As far as parenting goes, that’s all that really mattered in that blog post.