Obviously one of the big discussions since Ferguson has been race relations. But another big discussion was prompted not by the initial shooting of Michael Brown, but by the heavy-handed response of the police to subsequent demonstrations. In particular, there were a lot of pics of the heavily-armed police with comments from Iraq and Afhganistan vets saying, basically, that the cops in Ferguson had heavier body armor and weapons then our front-line combat troops in an actual war zone. 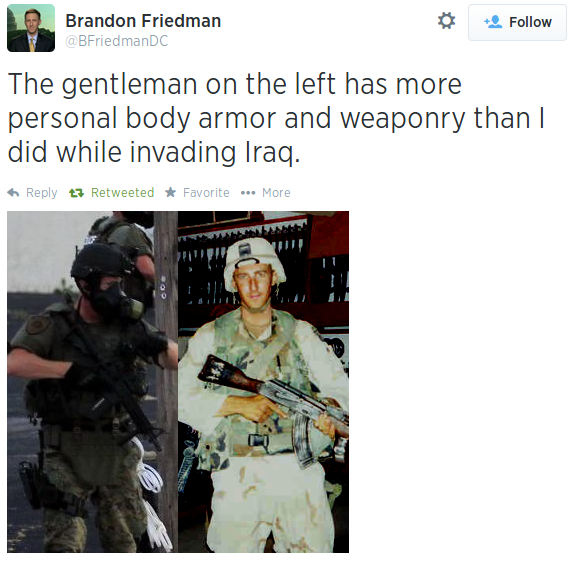 There’s a lot going on, including historical reasons why police departments in black neighborhoods tend to be staffed by white officers from other neighborhoods, but one of the biggest problems fueling the rising militarization of police forces is the message the the world is becoming a scary, threatening, hostile police for cops in some new and dangerous way. In a conversation with a friend on Facebook, I decided to do some really quick back-of-the-envelope calculations to determine if there was any evidence of the idea that cops today face new threats that make their jobs more dangerous in the past. I found some police mortality data here and stuck it in Excel. Then I did look backs for 10-, 20-, 30-, 40-, and 50-year periods with a simple linear trend. It was clearly negative in every single case. You want to get police death tolls as low as they have been in recent years? You have to go literally back to the 1950s. And that’s not adjusted for population, so it was actually probably safer back then, too.

Meanwhile, the list of botched, military-style police raids is growing. To give you an anecdote, Salon covered a story in June of a SWAT raid where the cops tossed a flashbang grenade into a two-year-old’s crib, blowing a hole in his chest and nearly killing him. No drugs were found in the house, and the target of the raid wasn’t even present. The good news is that the little boy survived. The bad news is that–after promising to pay for the nearly $1,000,000 in medical expenses required to save his life–the Georgia county changed their mind and is refusing to help at all. Lest you think that this is just one rare, isolated incident, the CATO Institute has an interactive map of hundreds of botched SWAT raids from across the country.

The most recent story is of a South Carolina state trooper panicking and shooting an unarmed man in the back when the man tried to get his wallet to show his ID as the trooper had requested. The state trooper has already been fired and faces criminal charges, and luckily the unarmed man survived. Radley Balko wrote an article about this (A (sort of) defense of South Carolina state trooper Sean Groubert) in which he made a lot of the same points I had already uncovered: police fatalities are trending downwards. Despite this, however, rhetoric about danger and violence is on the rise and police training is increasingly focused on aggressive violence instead of de-escalation. Balko writes:

Yesterday I wrote about another police shooting, the killing of John Crawford in a Beavercreek, Ohio, Walmart. I suggested that the incident may have been due to the sensationalization of mass shooting incidents, and the misperception that such incidents are common. After my post went up, the Guardian reported that indeed, the officer who shot Crawford had recently attended an a “pep talk” for police about responding to calls that may involve an active shooter.

He goes on to describe the “pep talk” as a highly manipulative presentation in which police officers were encouraged to imagine that their own family members were at risk unless they acted with “speed, surprise and aggressiveness” to take out the threat. Even if, as the case happened to be, the threat was a man holding an empty BB gun.

So here’s one of the big problems: humans are really, really bad at dealing with risk in a rational way. Mass shootings are exceptionally rare events,1 but they are horrific and grab our attention the same way that, for example, shark attacks do. This isn’t to say no changes were needed, however. During the Columbine shootings, the police waited for hours while victims bled to death because doctrine at the time called for establishing a secure perimeter and waiting for overwhelming force. This was because the threat was assumed to be some kind of hostage situation, not a murder-suicide killing spree. Since that time, cops have adapted to new policies that call for first responders to engage immediately (even without backup) in the event of in-progress killing. That’s good2, but Balko’s article suggests we’ve gone too far in that direction and are training cops to jump to the worst possible assumption and pull the trigger. Similarly, and this is my own hypothesis, but it seems as though necessary social reactions to ease the trauma of officers who have used deadly force3 may also have gone overboard:

In its damning report on the Albuquerque Police Department last April, for example, the Justice Department noted that the city’s police “too often use deadly force in an unconstitutional manner in their use of firearms,” “often use deadly force in circumstances where there is no imminent threat of death or serious body harm,” and that this was caused by serious deficiencies in training. In fact, the DOJ report found that officers who did use improper deadly force were often held up as heroes or examples within the department. [emphasis added]

But there’s another possibility that Balko doesn’t consider, and that is that the cops might be responding to a very real increase in violence despite the lack of an increase in fatalities. The problem here is a subtle one, but it’s one that’s been reported before. Essentially: we tend to measure violence in terms of fatalities, but as medical technology improves you can end up getting an apparent decrease in violence (fatalities) even as actual violence is increasing (number of gunshot victims, for example). This isn’t hypothetical. As the Wall Street Journal has reported:

The number of U.S. homicides has been falling for two decades, but America has become no less violent. Crime experts who attribute the drop in killings to better policing or an aging population fail to square the image of a more tranquil nation with this statistic: The reported number of people treated for gunshot attacks from 2001 to 2011 has grown by nearly half.

So the murder rate is going down, but the number of victims of gun violence are going up. And the driver for that is medical technology:

Emergency-room physicians who treat victims of gunshot and knife attacks say more people survive because of the spread of hospital trauma centers—which specialize in treating severe injuries—the increased use of helicopters to ferry patients, better training of first-responders and lessons gleaned from the battlefields of Iraq and Afghanistan.

It’s possible–and this is just my speculation–that the same trend could be taking place to an even greater degree among police officers. The trend of greater survival after gunshot would be based primarily on two things: 1. superior equipment (e.g. ballistic vests) and 2. superior training. In other words, it’s possible that the wide perception among police officers that they face a more hostile and dangerous world may be true even if the raw statistics on fatality don’t bear it out because measuring just fatality is missing the underlying violence.

I don’t have the data to draw conclusions on this, but there’s definitely enough evidence that commentators like Balko might want to be more cautious in their dismissal of the concerns of LEOs and the easy conclusion that “By most any measure, the United States is less dangerous than it’s been since the 1950s.” The truth might not be so simple, and on an issue this important we’ve got to dig a little deeper and find out what is really going on.