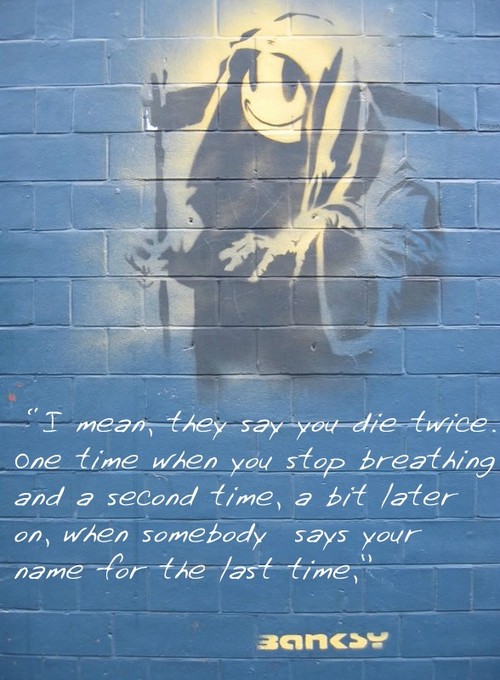 Carl had a really beautiful insight over on his blog I Feel Like Schrödinger’s Cat that linked Banksy1 with Mormon temple in a way that’s as profound as it is surprising. Based on the image / quote from Banksy (at left), he wrote:

When your name is said for the last time, that means the memory of you is now dead and gone forever. And that will happen to all of us. However, having worked in the temple for about a month now… I had another thought. As I sat there helping out and participating in all of these rituals for our honored dead, it occurred to me that, for each person who has lived on the planet, we say their names multiple times in the temple as they go from baptism, to confirmation, to initiatory, to endowment, and then to sealings.

Very likely, for most of the humans on the planet, the last time their name will be said out loud will be in an LDS temple.

Carl points out that there’s a beauty to that, and he’s right. I think it’s even a beauty that can be admired by those who don’t believe Mormonism is true.

I think this might actually be one of the best and most accessible explanations for Mormon posthumous work that I’ve ever read.

1 thought on “Banksy and the Temple”