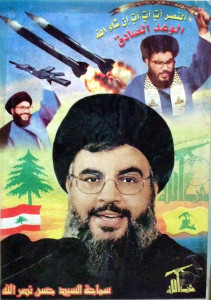 Much is being made of Hezbollah chief Hassan Nasrallah’s indirect condemnation of the Charlie Hebdo massacre. Perhaps too much. I understand why the statement is considered a big deal. When Muslims are condemned as a group for terrorist attacks, it is good to see prominent Muslim voices condemning violence. It shows that violence is not an integral part of Islam. However, I find Nasrallah’s statement highly problematic. After all, Nasrallah is hardly a moderate himself. Under Nasrallah’s command, Hezbollah has fired rockets at an Israeli hospital, blown up a bus of Israeli tourists in Bulgaria, and bombed the Jewish community center in Buenos Aires, to name but three examples. The number of fatalities in the Argentinean attack alone far exceeds the body count in the Charlie Hebdo massacre. I’m excluding attacks on military and political targets as it could be argued that these have their own form of legitimacy, but I might as well add another example. Hezbollah for years had targeted Jewish towns and villages with rocket fire. It never distinguished between the military and civilians, and sometimes deliberately targeted civilian areas. Then, in 2006, a rocket fell quite close to my parent’s house. There luckily were no fatalities in our village, but I guess that I do have a personal reason for not taking Nasrallah’s statement at face value. It is not a simple condemnation of religiously motivated violence. I think that the explanation is simple. Nasrallah is a Shiite militant, and al Qaeda are Sunni militants. They are opposed to each other on sectarian grounds, and are also political rivals. While the two groups may have collaborated on occasion, they generally do not peacefully inhabit the same spaces. Hezbollah (and its Iranian backers) have been fighting al Qaeda directly ever since the Syrian civil war, seeing in it an existential threat. Condemning the Charlie Hebdo massacre allows Nasrallah to increase his prestige and moral capital at the expense of al Qaeda’s, his bitter rival. This is not a principled condemnation of terrorism as something opposed to the fundamental principles of Islam. It is little more than political maneuvering. There are so many worthier Muslim voices decrying violence (such as many of the entries on this list) that it is a shame to mention Nasrallah’s alongside them.