Sociologist W. Bradford Wilcox has had an excellent article in The Washington Post a few days ago largely drawing on the work of Harvard’s Robert Putnam. Drawing from Putnam’s latest book Our Kids: The American Dream in Crisis, Wilcox writes, 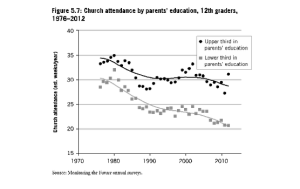 One of the tragic tales told by Harvard scholar Robert Putnam…is that America’s churches have grown weakest in some of the communities that need them most: poor and working-class communities across the country. The way he puts it, our nation’s churches, synagogues and mosques give children a sense of meaning, belonging and purpose — in a word, hope — that allows them to steer clear of trouble, from drugs to delinquency, and toward a bright and better future, warmer family relationships and significantly higher odds of attending college…The picture of religion painted by Putnam, a political scientist and the foremost scholar of American civic life, is part of a broader canvass in his book showing that kid-friendly institutions — not just churches, but also strong families and strong schools — are withering, but almost entirely in less-affluent communities.

While Putnam attributes some of this to the decline “in employment for less-educated men, divergent incomes for college-educated and less-educated men, and a “breathtaking increase in inequality”” in the 1970s, Wilcox notes that his research finds the “dramatic declines in religious attendance began in the 1960s, well before the economic factors stressed by Putnam kicked in a decade later.” “The timing of religious declines,” explains Wilcox, “paralleled and reinforced by the retreat from marriage that also began in the 1960s, leaving more and more kids in single-parent homes — suggests that America’s religious and familial capital was suffering well before the economic shocks of the 1970s.”

Wilcox continues to draw on Putnam’s work while adding fresh insights. The whole thing is worth reading. Check it out.