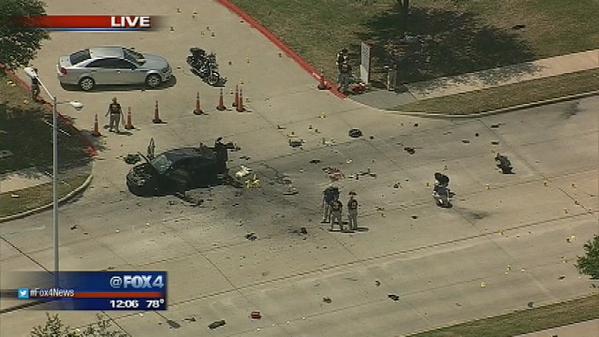 I haven’t written about guns and gun control in a long time. In part, this is a sad indictment of American politics: we talk about gun control pretty much exclusively in the wake of some horrific massacre (here or abroad) and, other than that, pretty much not at all. It’s not just gun policy that is addressed in this haphazard, sensationalist way, of course. It’s basically everything in American politics–short of a few issues that have movements behind them to give them perennial visibility–that basically ping-pong between utter obscurity and nauseating sensationalism.

But two events from earlier this month brought the issue to mind, and I at least wanted to note them. The first is the massacre that did not take place in Texas on May 3, 2015. ISIS later claimed credit for this attack, making it the first ISIS-backed terrorist attack on US soil. I’m not really sure why they claimed credit, however, because the attack was shortlived and no one died except the would-be mass murderers. A contest was being held, attended by a sparse crowd of about 75, to see who could come up with the best cartoon depiction of the Prophet Mohammad, and two men drove up, got out of their car, and opened fire with semi-automatic rifles at a security guard in an attempt to gain entrance. Instead, the security guard drew his handgun and shot  both attackers to death. No one else was killed, although another unarmed security guard was lightly wounded by the attackers.

Breitbart drew a straight line between the failed attack in Texas and the Charlie Hebdo attack in January of this year, noting that “When armed terrorists attacked Charlie Hebdo headquarters over Muhammad cartoons on January 7, unarmed police officers were forced to flee for their lives.” I’m not really thrilled at the glee with which some conservatives embraced this story. It’s hard to reconcile fear of a militarized police force with sneering condescension at our European neighbors for having unarmed police. Still, the story does underscore one sad reality: the only short-run response to a violent attack is with more, better violence.

The second example is even more interesting. As Business Insider reports, “An Uber driver with a concealed handgun prevented a mass shooting in Chicago.” The city of Chicago is, of course, known for both its horrific gun violence and also its draconian anti-gun laws. These laws made it the focus of the SCOTUS case McDonald v. Chicago which held that the 2nd Amendment (like other Constitutional rights) applies at the state level.

Gun control advocates openly scoffed at the idea that a concealed carry permit holder would ever be able to stop a crime in progress, suggesting that the only thing that would happen would be more fatalities. And yet the Uber driver in Chicago fired 6 shots, hit the target multiple times, and nobody else was injured. The list of mass shootings stopped by a civilian just got a little longer.1

In some ways it’s fitting that Charlie Hebdo come up in this conversation. Like a lot of people, I preferred to say “We are Ahmed” rather than “We are Charlie” in the days following the attack. I support the right of free speech, but some of the cartoons published by Charlie Hebdo made me support that right with a grimace rather than a smile. The same goes for guns. There is nothing happy or beautiful in the act of killing, even when the motives are noble and the violence is necessary. The fundamental right to self-defense is one I support in both theory and in practice, but it’s never been something I can be unreservedly excited about.