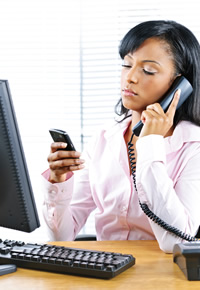 Or at least the notifications. That seems to be what a recent blog post at the Harvard Business Review suggests:

Multitasking…imposes a heavy cognitive load and hurts performance on a task, because our mental resources are finite and have to be allotted to discrete tasks. That’s why you’re not supposed to talk on the phone or text while you’re driving, and why many campaigns urge drivers to wait to respond until they’re no longer behind the wheel.

In an experiment with over 200 undergrads, researchers gave the participants a Sustained Attention to Response Task (SART). This consisted of a 10-minute exercise during which the students pressed a key whenever a number flashed onscreen (unless it was the number “3”). Eventually, one-third of the students received notifications, another phone calls, and another nothing at all (see the article for more detail). The results?

So basically, just having your phone near you can distract you and negatively affect your work performance. And this distraction-by-notification might even be comparable to interacting with your phone. Stothart said that in terms of effect size, their results were consistent with those of the distracted driving literature, which has looked at the effects of texting or talking on the phone (interacting) while driving.

Probably why I can’t get anything done.