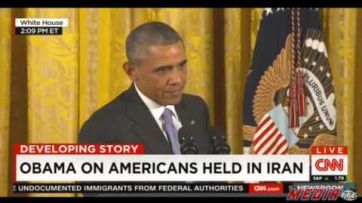 After watching the recent presidential news conference, I agree with Nathaniel that Garrett’s question was exploitative, and that the tone of president Obama’s response was effective and appropriate. I’ll even go so far as calling the response masterful. Garrett lost. That being said, I find the content of Obama’s response deeply problematic.

Obama knows only too well that the no ransom policy is not exactly straight-forward. In November of last year, Obama had the US policy on hostages reevaluated. In June of this year, it was announced that while the US government will continue its official no ransoms policy, family members may pay ransoms themselves. Not only that, the government will assist in communicating and negotiating with the captors. In other words, ransoms can be paid, and the leg work can be done by the US, but the ransoms cannot be paid by the state. This is because not paying ransoms does not actually prevent hostage taking. What it does is ensure the hostages’ deaths. Ransoms do provide an easy source of funding for terrorist organizations, which is where the real concern lays as far as counter-terrorism is concerned.

The US, though, has made exceptions to its policy, most notably in the case of Bowe Bergdahl. I personally think that Obama did the right thing in securing Bergdahl’s release. Soldiers need to have the confidence that everything will be done to bring them back. The deal itself, though, is a classic case of giving terrorists concessions. The Taliban received five of its men for one low-ranking US soldier. Of course they will leap at an opportunity to take more soldiers (and civilians) captive.

Obama, then, can and has made exceptions when it comes to securing the release of US citizens held by terrorist organizations. He has made emotional appeals not to consider them abstractions, but to understand that they are real people who may never see their families again. The response to Garrett does not explain no exceptions were made in this case, or why the release of the Americans was not insisted upon for any of the major concessions Obama was willing to grant Iran. If Iran, China, and Russia were given the choice of either an Iran with American prisoners and no lifting of the conventional arms embargo, or an Iran with American prisoners and a continued embargo, it is hard to see why they would pick the latter when they stand to gain quite a bit more from the former.

Obama is also being a little disingenuous when it comes to employing the hostage logic. The four Americans (or at least the three whose whereabouts are known) are not being held hostage, they are prisoners. They have not been used by Iran as bargaining chips in the nuclear negotiations. Obama wants Iran to be considered a responsible state actor with whom other state actors can have normative relations. These states do not take hostages for the purpose of gaining concessions. If Iran is not such a state, then Obama has done far worse damage by granting Iran political legitimacy and lifting sanctions than any concessions in the prisoners matter would have done. He cannot have it both ways. Garrett’s trap backfired, but Obama’s response leaves too many big questions unanswered.