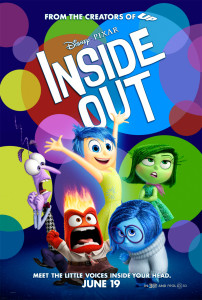 I’m a huge Pixar fan. Have been ever since 1995’s Toy Story. One of the best books I’ve read this year is Pixar founder Ed Catmull’s Creativity, Inc.: Overcoming the Unseen Forces That Stand in the Way of True Inspiration. The studio’s film quality is highly consistent1 and their latest Inside Out is no exception. This film tackles the complicated subject of human emotions (in the form of a little girl named Riley) and does so extremely well.2 Their ability to handle the subject of emotions so delicately and accurately was likely aided by their scientific consultants, one of which is director of the Greater Good Science Center at UC Berkeley. Because the film presents a healthy understanding of emotions, parents should seriously consider taking their children to see it and use it as a teaching tool. Here are four lessons kids (and adults) can learn from Inside Out:

1. Happiness is not just about joy

[B]y the end of the film, Joy [Amy Poehler]…learns that there is much, much more to being happy than boundless positivity. In fact, in the film’s final chapter, when Joy cedes control to some of her fellow emotions, particularly Sadness, Riley seems to achieve a deeper form of happiness.

This reflects the way that a lot of leading emotion researchers see happiness. Sonja Lyubomirsky, author of the best-selling How of Happiness, defines happiness as “the experience of joy, contentment, or positive well-being, combined with a sense that one’s life is good, meaningful, and worthwhile.” (emphasis added) So while positive emotions such as joy are definitely part of the recipe for happiness, they are not the whole shebang.

Thank goodness emotion researcher June Gruber and her colleagues started looking at the nuances of happiness and its pursuit. Their findings challenge the “happy-all-the-time” imperative that was probably imposed upon many of us.

For example, their research suggests that making happiness an explicit goal in life can actually make us miserable. Gruber’s colleague Iris Mauss has discovered that the more people strive for happiness, the greater the chance that they’ll set very high standards of happiness for themselves and feel disappointed—and less happy—when they’re not able to meet those standards all the time.

…What’s a more effective route to happiness for Riley (and the rest of us)? Recent research points to the importance of “prioritizing positivity”—deliberately carving out ample time in life for experiences that we personally enjoy. For Riley, that’s ice hockey, spending time with friends, and goofing around with her parents.

3. Sadness is vital to our well-being 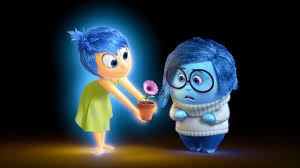 same…In one the film’s greatest revelations, Joy looks back on one of Riley’s “core memories”—when the girl missed a shot in an important hockey game—and realizes that the sadness Riley felt afterwards elicited compassion from her parents and friends, making her feel closer to them and transforming this potentially awful memory into one imbued with deep meaning and significance for her.

With great sensitivity, Inside Out shows how tough emotions like sadness, fear, and anger, can be extremely uncomfortable for people to experience—which is why many of us go to great lengths to avoid them…But in the film, as in real life, all of these emotions serve an important purpose by providing insight into our inner and outer environments in ways that can help us connect with others, avoid danger, or recover from loss.

At one point, Joy attempts to prevent Sadness from having any influence on Riley’s psyche by drawing a small “circle of Sadness” in chalk and instructing Sadness to stay within it. It’s a funny moment, but psychologists will recognize that Joy is engaging in a risky behavior called “emotional suppression”—an emotion-regulation strategy that has been found to lead to anxiety and depression, especially amongst teenagers whose grasp of their own emotions is still developing. Sure enough, trying to contain Sadness and deny her a role in the action ultimately backfires for Joy, and for Riley…Toward the end of the movie, Joy does what some researchers now consider to be the healthiest method for working with emotions: Instead of avoiding or denying Sadness, Joy accepts Sadness for who she is, realizing that she is an important part of Riley’s emotional life.

Emotion experts call this “mindfully embracing” an emotion. What does that mean? Rather than getting caught up in the drama of an emotional reaction, a mindful person kindly observes the emotion without judging it as the right or wrong way to feel in a given situation, creating space to choose a healthy response. Indeed, a 2014 study found that depressed adolescents and young adults who took a mindful approach to life showed lower levels of depression, anxiety, and bad attitudes, as well as a greater quality of life.

Everyone should go see it.