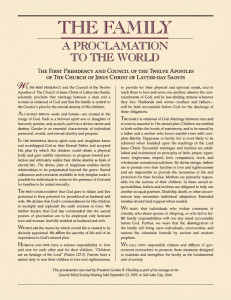 Over at Worlds Without End, I’ve written a piece on the political and social context in which The Family: A Proclamation to the World was developed. Laura Compton at Rational Faiths has demonstrated that the LDS Church’s entanglements with same-sex marriage date back to the early 1990s and spawned the creation of the Family Proclamation. I agree that this is the origin of the Proclamation. However, I think there is more going on in the Proclamation itself and within the political climate that produced it than is typically realized. Discussions over welfare and family breakdown had increased in frequency and popularity throughout the mid-1980s and into the 1990s, leading up to welfare reform under President Clinton. For our readers who have an interest in our posts on marriage and family here at Difficult Run, Mormonism, or both, you might find my post interesting.