I’m a fan of the Cato Institute’s ongoing essay series Cato Unbound. Their most recent edition is on a topic of major interest to me: family and politics. The essays are based on political scientist Lauren K. Hall’s book Family and the Politics of Moderation: Private Life, Public Goods, and the Rebirth of Social Individualism. Hall writes, 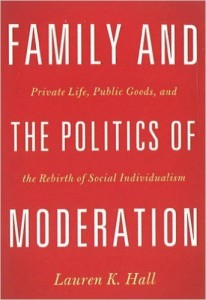 …[T]he family challenges our most fundamental values and makes the creation of a consistent political theory essentially impossible. Those who emphasize the unlimited freedom of the individual come quickly up against the iron wall of genetics, early childhood development, and family experiences. We are not free to choose our families and our early familial experiences play a foundational role in the kind of person we eventually become. Individualists like Ayn Rand emphasize rationality and free choice only to be stymied by emotional and accidental bonds. The family is also one of the only places in the world where the creed “to each according to his need” not only works, but is indispensable. The family also challenges individualist arguments for personal responsibility and self-sufficiency since it relies in large part on the reality of human need and dependence. It is no accident that John Galt is an orphan.

On the other side of the spectrum, families are the root of inequality. This comes about both through the family’s role in education, habituation, and socialization, and through its intimate connection with property rights. The family’s multigenerational bonds challenge the demands of immediate collective decision-making and bind us to rules, habits, and ways of life that reject rationalist and egalitarian reforms. The family is the originator of unequal opportunity. The family also challenges egalitarianism due to its generally hierarchical form, which relies on the natural authority of parents over children for familial action. The reality of pregnancy, birth, and nursing places further stress on a strict egalitarian division of labor. Finally, families represent a divisive internal pull against collective identities. Families represent the private sphere in all its complexity of private and intimate bonds. The collective egalitarian cry that the private is really political is inevitably complicated by intimate groups that profoundly affect social structures but that also stubbornly refuse collectivization. The recognition that the family prevents radical egalitarian goals has led to (so far unsuccessful) calls to collectivize and control the family, from Marx and Engels to contemporary liberal feminists like Judith Moller Okin.

Economist Steve Horwitz provides additional insights from the works and theories of F.A. Hayek, based on his own forthcoming book Hayek’s Modern Family: Classical Liberalism and the Evolution of Social Institutions. Two more responses to Hall’s essay are in the process (one of which should appear later today).

Take a few minutes to read on this important topic.