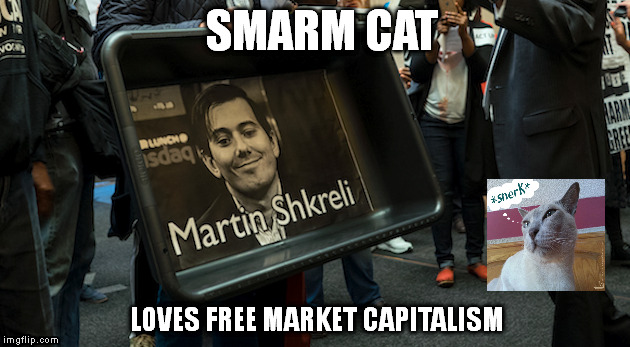 Back in September the Internet was momentarily preoccupied by news that Turing Pharmaceuticals (run by Martin Shkreli) had purchased a company which made the generic drug Daraprim. Darapim “is used to fight toxoplasmosis, an infection to which unborn babies, AIDS patients, and certain cancer patients are vulnerable,” wrote Martin Tillier at NASDAQ.com. Darapim had been sold for less than $15 / pill, but Shkreli raised the price by more than 5,000% to $750 a pill. This–along with the news that VW had been faking emissions tests–made it “a bad week for capitalism.”

Lots of folks used this as an object lesson in why capitalism is bad, and so the torrent of memes began. I’ve collected a few in this post to give you a sample. 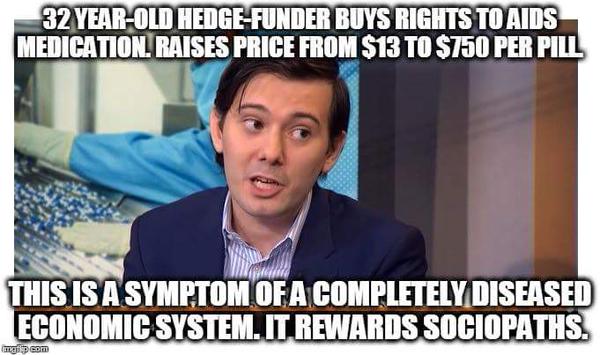 You see, Darapim is not protected by any patents because it is such an old drug. If it was protected by patents, then Shkreli could charge whatever he wanted without fear of immediate competition, but that wouldn’t be the free market at work. That would be government regulation at work, since government regulation is the thing that would be preventing competitors from selling the drug, too. So Darapim was only being manufactured by one company (the one that Shrkeli bought), but there was nothing to prevent other companies from entering the market.

When Darapim was priced at $13.50, no one bothered to compete. This is primarily because setting up a new drug manufacturing line is expensive and–although Darapim is a life-saving drug for the folks who need it–not many folks need it. But when Shrkeli hiked the price to $750, it created plenty of room for competitors to offer their own products.

And now one has. San Diego-based Imprimis Pharmaceuticals Inc. has stepped in to offer Darapim from their website for less than $1/pill. Live by the sword, die by the sword. Or, in the words of finance professor Ramon P. DeGennaro, “Nothing protects consumers better than competition.”

Couple of notes for those interested in the economics, by the way. This isn’t just a textbook econ 101 case of market entry. If nobody wanted to compete at $13.50/pill, then any company who entered after Shkreli raised the price to $750 would have offered their competing product at a price lower then $750, but higher than $13.50. If they could have made a profit at less than $13.50, they would likely have done so already. But Imprimis is selling Darapim for less than $1/pill. Why?

The answer is PR. Imprimis will probably lose money on every pill they sell, but–because Darapim is not a product that is going to get popular–they also already know the maximum amount they stand to lose, and they see that as an expenditure for a brilliant marketing campaign. Think of all the goodwill and publicity that Imprimis gets from standing up as the good guy to oppose Shkreli’s creepiness and greed. So this is about competition, but it’s about competition in a dynamic, interactive system with many, many products and services rather than just a simple case of competition in a single market with a single product.