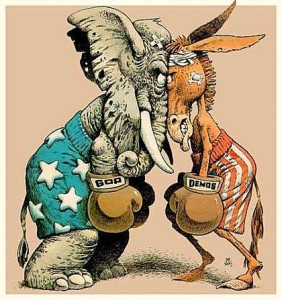 The nature of partisan politics has shifted over the last few decades, transforming political parties into tribal identities and opposing partisans into what philosopher Jason Brennan calls “civic enemies.” This is likely unsurprising to most readers, but now there is intriguing evidence supporting the inkling. Recently, Vox reported on the research of political scientists Shanto Iyengar and Sean Westwood, which found that America’s two dominating parties have become even more polarized:

The experiment was simple. Working with Dartmouth College political scientist Sean Westwood, Iyengar asked about 1,000 people to decide between the résumés of two high school seniors who were competing for a scholarship.

The point of the project was to see how political and cues affected a nonpolitical task — and to compare the effect with race. The results were startling.

Think about that for a moment: When awarding a college scholarship— a task that should be completely nonpolitical — Republicans and Democrats cared more about the political party of the student than the student’s GPA. As Iyengar and Westwood wrote, “Partisanship simply trumped academic excellence.” It also trumped race.

The whole piece is both fascinating and deeply troubling and provides more reason for me to disengage from politics altogether. As Georgetown professor Peter Jaworski commented on Facebook in light of these findings, “Partisan politics corrupts your character. Instead of trying to get votes for your favoured tribe, try to make money instead. Engaging in markets makes mean people nicer, makes you more trustworthy, more charitable, and more beneficent.”