Economist Mark Perry has put together an eye-opening chart based on data from the Bureau of Economic Analysis and the World Bank that compares GDP per capita (PPP) in the United States (state-by-state) and other countries, including those of Europe. As Perry explains,

Adjusting for PPP allows us to make a more accurate “apples to apples” comparison of GDP per capita among countries around the world by adjusting for the differences in prices in each country. For example, the UK’s unadjusted GDP per capita was $45,729 in 2014, but because prices there are higher on average than in the US (for food, clothing, energy, transportation, etc.), the PPP adjustment lowers per capita GDP in the UK to below $40,000. On the hand, consumer prices in South Korea are generally lower than in the US, so that increases its GDP per capita from below $28,000 on an unadjusted basis to above $34,000 on a PPP basis.

And what does he find? 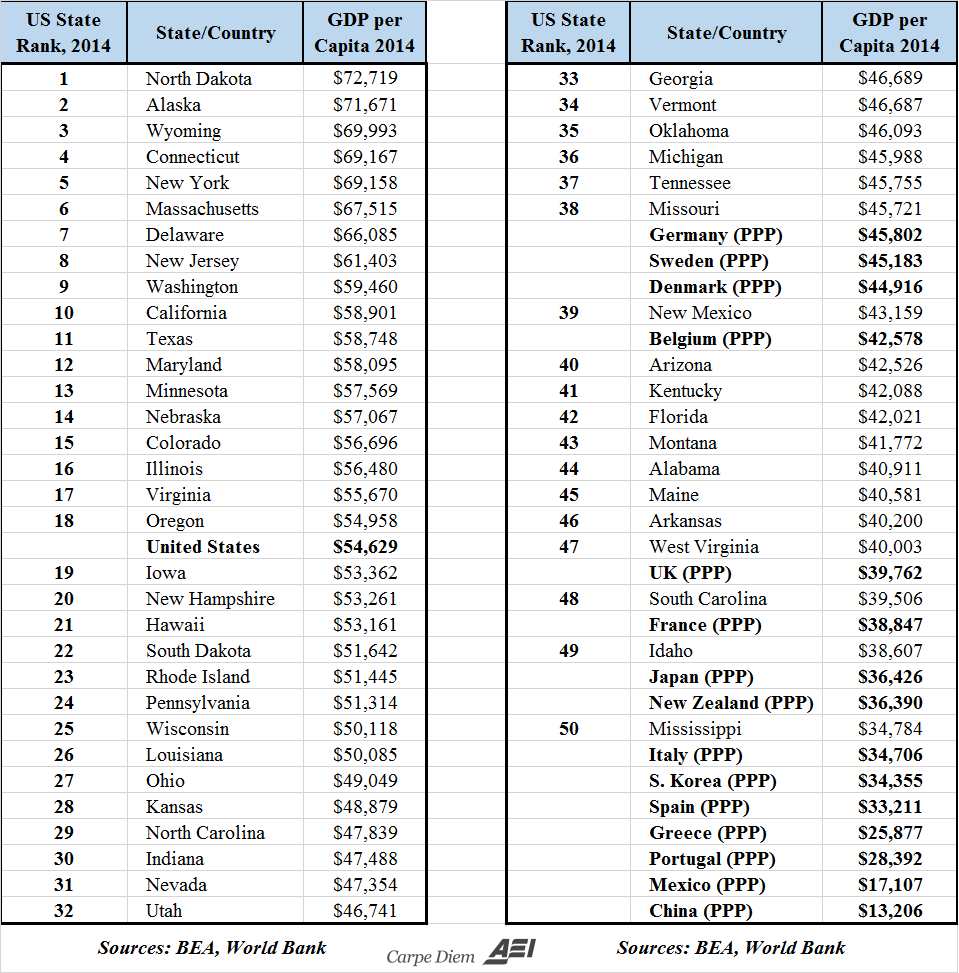 “As the chart demonstrates,” Perry writes,

most European countries (including Germany, Sweden, Denmark and Belgium) if they joined the US, would rank among the poorest one-third of US states on a per-capita GDP basis, and the UK, France, Japan and New Zealand would all rank among America’s very poorest states, below No. 47 West Virginia, and not too far above No. 50 Mississippi. Countries like Italy, S. Korea, Spain, Portugal and Greece would each rank below Mississippi as the poorest states in the country.

None of this suggests that policy in America is ideal (it isn’t) or that European nations are failures (they still rank among the wealthiest places on the planet).

I’m simply making the modest — yet important — argument that Europeans would be more prosperous if the fiscal burden of government wasn’t so onerous. And I’m debunking the argument that we should copy nations such as Denmark by allowing a larger government in the United States (though I do want to copy Danish policies in other areas, which generally are more pro-economic liberty than what we have in America).

1 thought on “GDP Per Capita: United States vs. Everyone Else”