A “best in region” scenario in which all countries match the rate of improvement of the fastest-improving country in their region could add as much as $12 trillion, or 11 percent, in annual 2025 GDP. In a “full potential” scenario in which women play an identical role in labor markets to that of men, as much as $28 trillion, or 26 percent, could be added to global annual GDP by 2025. MGI’s full-potential estimate is about double the average estimate of other recent studies, reflecting the fact that MGI has taken a more comprehensive view of gender inequality in work. 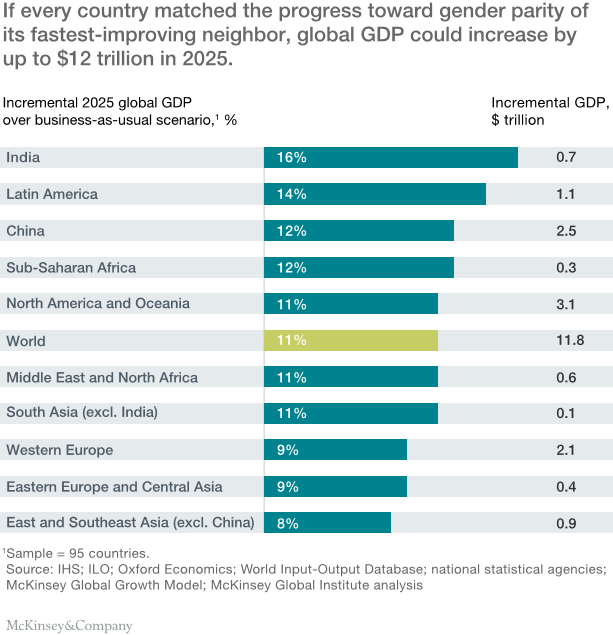 MGI focused on 15 gender-equality indicators, all of which fell under the categories (1) equality in work, (2) essential services and enablers of economic opportunity, (3) legal protection and political voice, and (4) physical security and autonomy. Both developing and advanced countries stand to gain from increased gender parity. “MGI’s new Gender Parity Score (GPS) measures the distance each country has traveled toward gender parity, which is set at 1.00. The regional GPS is lowest in South Asia (excluding India) at 0.44 and highest in North America and Oceania at 0.74. Using the GPS, MGI has established a strong link between gender equality in society, attitudes and beliefs about the role of women, and gender equality in work.” Furthermore, “MGI has identified ten “impact zones” (issue–region combinations) where effective action would move more than 75 percent of women affected by gender inequality globally closer to parity. The global impact zones, which are globally pervasive issues, are blocked economic potential, time spent in unpaid care work, fewer legal rights, political underrepresentation, and violence against women.”1

So, if thinking of women as equals on moral and ontological grounds is just too much of a stretch for you,2 try indulging in a little economic self-interest and fight for gender equality.