A brand new study analyzes the economic proposals of both Trump and Clinton and the results aren’t encouraging. As reported by Financial Times,

US Republican presidential candidate Donald Trump’s protectionist trade policies would send the US into recession, result in the loss of almost 4.8m private sector jobs and lead to shortages of consumer goods such as iPhones, according to the most detailed study yet of his plan.

…The study also offers a sceptical view of Democratic candidate Hillary Clinton’s trade policies, and particularly her opposition to the Trans-Pacific Partnership,1 a vast new Pacific Rim trade pact the US has negotiated with Japan and 10 other economies.

But Mr Trump’s threats to rip up existing US trade agreements and impose punitive 45 per cent tariffs on goods from China and a similar 35 per cent levy on products imported from Mexico would probably set off a trade war and wreak huge damage on the US economy, the study found. 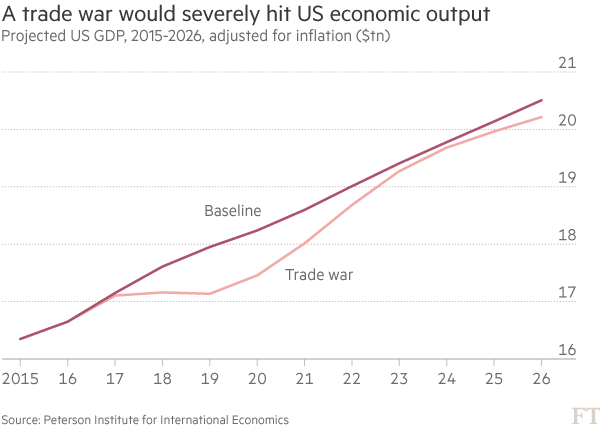 While the “biggest trade-related employment impact…would be in manufacturing and on states such as Washington,” it turns out “the biggest impact on jobs would come as the consequences of a trade war reverberate out across the economy hitting retail distribution hubs, grocery stores, restaurants and even hospitals, the study found. It also would likely lead to shortages and higher prices of consumer goods — including popular products such as smartphones — and potentially even have an impact on US retirement savings.”