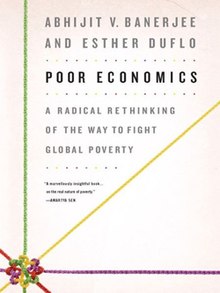 If readers couldn’t tell, economics and the condition of the global poor are topics dear to my heart. Overall, I believe that globalization–particularly free trade and liberal immigration–benefits the least well off. But this largely looks at the problem from a broad, institutional standpoint. Poor Economics: A Radical Rethinking of the Way to Fight Global Poverty by economists Abhijit Banerjee and Esther Duflo looks at the nitty-gritty details of the world’s poorest, providing the on-the-ground data necessary for constructing successful anti-poverty policies. The authors find five key factors that keep the poor trapped in poverty:

The book was eye-opening to say the least. You can see a TED talk by Esther Duflo below.