News and social media outlets have been reporting numerous incidents of racism, hate crimes, and racially-charged harassment since the Tuesday election outcome.1 According to USA Today, “There indeed has been a spike in the number of reports of such incidents, say representatives for two organizations that track such occurrences. A representative for one group, in fact, said the rise appears to be even worse that what was took place immediately after the terror attacks in 2001.” One of these organizations–the Southern Poverty Law Center–“says it has logged more than 200 complaints since the election, and while it could not provide a figure for the average number of complaints it takes in each day, Cohen assured that the number is much larger than what is typical.” Confidently declaring that the number is above average while being unable to provide an average to compare it to is rather unhelpful and possibly just a case of availability bias (they may have a more detailed analysis in the next couple weeks). Furthermore, there is the need to distinguish between legitimate and fabricated complaints.2

Nonetheless, what can we realistically assume? Some of us here at Difficult Run have compared the current American situation to the political climate that produced Brexit. Looking at the aftermath of the EU referendum may give us an idea of what to expect in the next couple months following Trump’s victory. According to the statistics released by the Home Office in October, racist or religious abuse incidents increased by 41% in England and Wales in the months following the UK’s exit from the European Union. 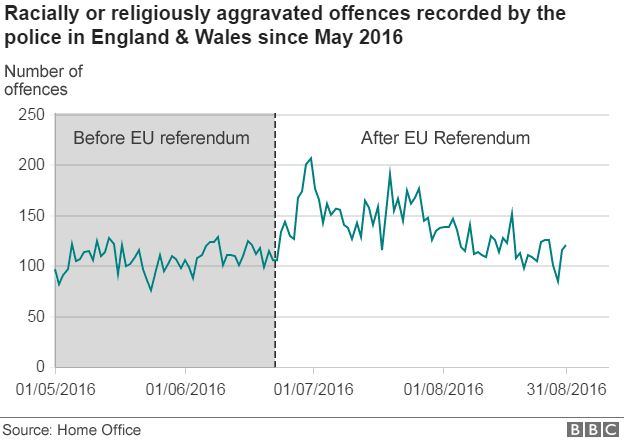 A more detailed description within the report

Without more evidence, it is impossible to determine if the hate crimes have continued to drop to average levels. It’s worth pointing out that when one looks at the trends from 2013-2016, it appears that the offenses go up during the summer and tend to decline as winter approaches. Some evidence suggests a correlation between hotter weather and crime, though this would not fully explain the significant jump we see in 2016. If anything, hotter weather added fuel to the fire (or vice versa). This could mean that with winter approaching, the American backlash will be comparatively smaller and shorter.

All this, of course, is conjecture. Americans will have to wait on the FBI’s 2016 hate crime stats to know for sure. Still, the spike in the UK following Brexit could possibly serve as a realistic model of what to expect in the next couple months: a short-lived, but abrupt increase in racially or religiously aggravated offenses followed by a steep decline.

Let’s hope it dies out even sooner.