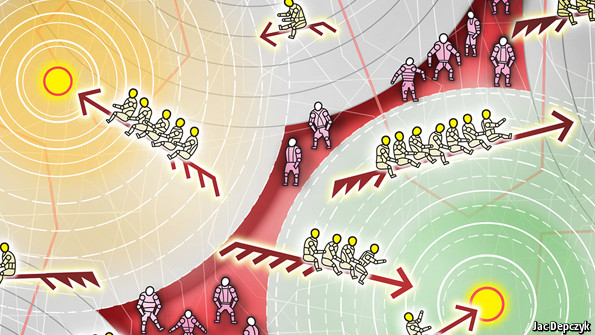 Does geography contribute to unemployment? “In a paper published in 1965,” reports The Economist,

John Kain, an economist at Harvard University, proposed what came to be known as the “spatial-mismatch hypothesis”. Kain had noticed that while the unemployment rate in America as a whole was below 5%, it was 40% in many black, inner-city communities. He suggested that high and persistent urban joblessness was due to a movement of jobs away from the inner city, coupled with the inability of those living there to move closer to the places where jobs had gone, due to racial discrimination in housing. Employers might also discriminate against those that came from “bad” neighbourhoods. As a result, finding work was tough for many inner-city types, especially if public transport was poor and they did not own a car.

Is there any data to back up this theory?

A new paper,1 published by the National Bureau of Economic Research…looks at the job searches of nearly 250,000 poor Americans living in nine cities in the Midwest. These places contain pockets of penury: unemployment in inner Chicago, for instance, is twice the average for the remainder of the city. Even more impressive than the size of the sample is the richness of the data. They are longitudinal, not cross-sectional: the authors have repeated observations over a number of years (in this case, six). That helps them to separate cause and effect. Most importantly, the paper looks only at workers who lost their jobs during “mass lay-offs”, in which at least 30% of a company’s workforce was let go. That means the sample is less likely to include people who may live in a certain area, and be looking for work, for reasons other than plain bad luck.

For each worker the authors build an index of accessibility, which measures how far a jobseeker is from the available jobs, adjusted for how many other people are likely to be competing for them. The authors use rush-hour travel times to estimate how long a jobseeker would need to get to a particular job.

If a spatial mismatch exists, then accessibility should influence how long it takes to find a job. That is indeed what the authors find: jobs are often located where poorer people cannot afford to live. Those at the 25th percentile of the authors’ index take 7% longer to find a job that replaces at least 90% of their previous earnings than those at the 75th percentile. Those who commuted a long way to their old job find a new one faster, possibly because they are used to a long trek.

Governments could seek to “help workers either to move to areas with lots of jobs, or at least to commute to them. That would involve scrapping zoning laws that discourage cheaper housing, and improving public transport. The typical American city dweller can reach just 30% of jobs in their city within 90 minutes on public transport. That is a recipe for unemployment.”2