During Kennedy’s presidency, writes The Economist,

the Mexicans were participating in the bracero programme, which allowed almost half a million people a year to take seasonal work on America’s farms. But the parallels with the present are plain. Donald Trump has also complained that immigrants are keeping Americans from good jobs and has promised to do something about it (another parallel: not since Kennedy has America seen such an astonishing presidential coiffure). So it is a good moment for a bracing new assessment of the bracero scheme and its demise.

Did it work? According to a new study, the answer is ‘no’:

We find that bracero exclusion had little measurable effect on the labor market for domestic farm workers. Pre- and post-exclusion farm wages and farm employment were similar in states highly exposed to exclusion—which lost roughly one third of hired seasonal labor—and in states with no exposure. Bracero workers were not substantially replaced in the years immediately following exclusion with domestic workers, unauthorized Mexican workers, or authorized non-Mexican foreign workers. We find instead that employers adjusted to exclusion, as predicted by the theory of endogenous technical change, with large changes in technology adoption and crop production. We reject the semielasticity of wages to labor scarcity implied by the model in the absence of endogenous technical change, and oer direct evidence of induced technical advance. These findings suggest that new theories of technological change can inform the design and evaluation of active labor market policy (pg. 2).

The exclusion of Mexican bracero workers was one of the largest-ever policy experiments to improve the labor market for domestic workers in a targeted sector by reducing the size of the workforce. Five years after bracero exclusion, leading agricultural economist William E. Martin uncharitably assessed the advocates of exclusion in a little-read book chapter. Those who had believed exclusion would help domestic farm workers “were obviously. . . extremely naïve”, he wrote, and the hoped-for effects in the labor market never arrived because “capital was substituted for labor on the farm and increased effort was exerted by the agricultural engineers in 30 providing the farmers these capital alternatives” (Wildermuth and Martin 1969, 203).

…The theory and evidence we discuss here contradicts a long literature claiming, largely without quantitative evidence, that bracero exclusion succeeded as active labor market policy. We find that bracero exclusion failed to raise wages or substantially raise employment for domestic workers in the sector. The theory of endogenous technical change suggests a mechanism for this null result: employers adjusted to foreign-worker exclusion by changing production techniques where that was possible, and changing production levels where it was not, with little change to the terms on which they demanded domestic labor (pgs. 30-31). 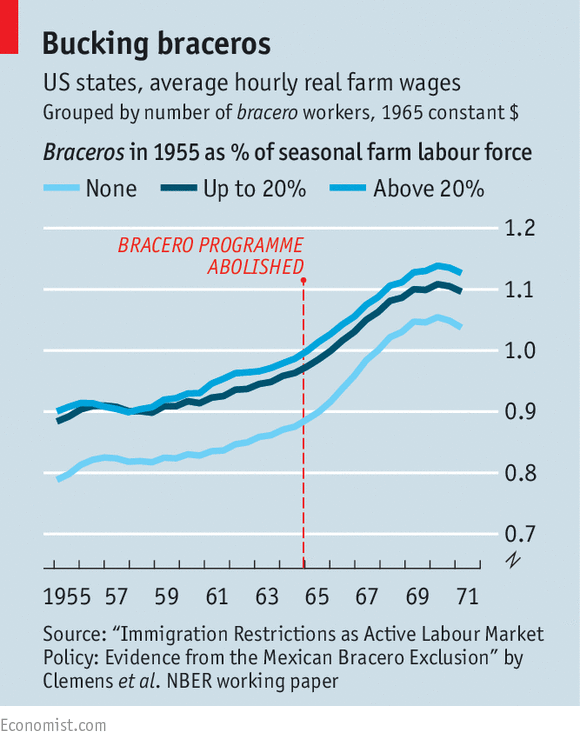