Some claim that corporate “short-termism“–or what Hillary Clinton called “quarterly capitalism“–has negative effects on the economy. But is there any evidence for the claim? A new McKinsey report answers in the affirmative:

The report concludes that “the potential value that could have been unlocked had all US publicly listed companies taken a long-term orientation exceeded $1 trillion over the past ten years” (pg. 7).

How do the researchers determine that a company is “long-term”? Their Corporate Horizon Index consists of five financial indicators: 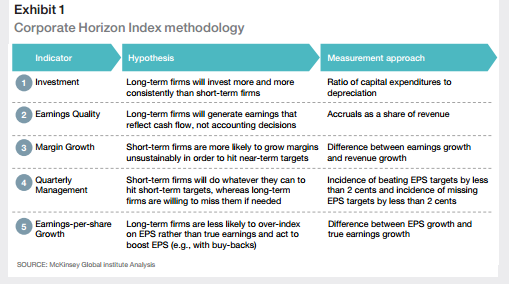 In a Harvard Business Review article, the researchers explain,

After running the numbers on these indicators, two broad groups emerged among those 615 large and midcap U.S. publicly listed companies: a “long-term” group of 164 companies (about 27% of the sample), which were either long-term relative to their industry peers over the entire sample or clearly became more long-term between the first half of the sample period and the second half, and a baseline group of the 451 remaining companies (about 73% of the sample). The performance gap that subsequently opened between these two groups of companies offers the most compelling evidence to date of the relative cost of short-termism — and the real payoff that arises from managing for the long term.

…While we can’t directly measure the cost of short-termism, our analysis gives an indication of just how large the value of what’s being left on the table might be. As noted earlier, if all public U.S. companies had created jobs at the scale of the long-term-focused organizations in our sample, the country would have generated at least five million more jobs from 2001 and 2015 — and an additional $1 trillion in GDP growth (equivalent to an average of 0.8 percentage points of GDP growth per year). Projecting forward, if nothing changes to close the gap between the long-term group and the others, then the U.S. economy could be giving up another $3 trillion in foregone GDP and job growth by 2025. Clearly, addressing persistent short-termism should be an urgent issue not just for investors and boards but also for policy makers.

How we manage matters.