the number of prescriptive words like “shall” or “must” in the code of federal regulations grew from 403,000 to nearly 963,000, or about 15,000 edicts a year, according to data compiled by the Mercatus Centre, a libertarian-leaning think-tank. Between 2008 and 2016, under Mr Obama, about the same number of new rules emerged annually.

The unyielding growth of rules, then, has persisted through Republican and Democratic administrations…Several factors explain it. First, Congress has neither the staff nor the expertise to write complex, technical laws. So lawmakers happily let experts in government agencies fill in the blanks. What Congress does write itself, it writes sloppily. In 2015 the Supreme Court found “more than a few examples of inartful drafting” in the Affordable Care Act. One such error nearly saw the court strike down crucial parts of law; only semantic gymnastics saved it. The “Chevron deference”, a doctrine from a 1984 court ruling, gives agencies wide latitude to interpret laws when they are vaguely written.

Second, America’s division of powers makes it easy for interest groups to defend any one regulation, tax break or policy. That forces administrations to solve problems by taping yet more rules onto whatever exists already, rather than writing something simple from scratch. Over time, this gums up the system, resulting in what Steve Teles of Johns Hopkins University has dubbed a “kludgeocracy”. This explains, for instance, why over half of Americans have to pay a professional to fill out their tax return for them (in Britain, for comparison, most people need not even complete one). 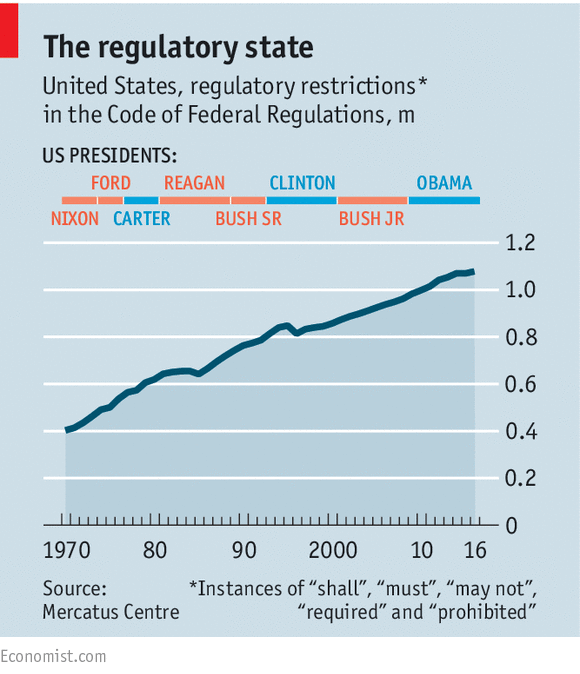 The biggest culprit though? What the article calls “the habits of Washington’s bureaucracy”:

When a government agency writes a significant regulation—mostly defined as one costing more than $100m—it must usually prove that the rule’s benefits justify its costs. Its analysis goes through the Office of Information and Regulatory Affairs (OIRA), a nerdy outpost of the White House. The process is meticulous. The OECD, a club of mostly rich countries, finds that America’s analysis of regulations is among the most rigorous anywhere.

But once a rule has cleared the hurdle, there is little incentive for agencies ever to take a second look at it. So it is scrutinised only in advance, when regulators know the least about its effects, complains Michael Greenstone, of the University of Chicago. The OECD ranks America only 16th for “systematic” review of old red tape. (The leading country, Australia, has an independent body tasked with dredging up old rules for review.)

…The endless pile-up of regulation enrages businessmen. One in five small firms say it is their biggest problem, according to the National Federation of Independent Business, a lobby group. (Many businessmen grumble in private about the Obama administration’s zealous regulatory enforcement). Based on its own survey of businessmen, the World Economic Forum ranks America 29th for the ease of complying with its regulations, sandwiched between Saudi Arabia and Taiwan.