A couple years ago, I linked to a post by AEI’s James Pethokoukis that claimed income inequality was in part explained by more profitable companies paying their employees more. A recent Harvard Business Review article by economist Nicholas Bloom further supports this insight. He says,

If we want to truly understand income inequality — if we want to mitigate it and its pernicious effects — we must look beyond CEO compensation and tax policy and consider the role played by firms and their hiring and compensation policies for ordinary, non-millionaire workers. This is not a simple morality play in which evil companies are pitted against the middle class. There is nothing nefarious about Google’s goal of being the global leader in software and machine learning, or in its hiring the best employees it can find. Yet the result of countless strategic decisions in pursuit of such goals by Google and other elite companies throughout the world — not just in tech — has been to raise the compensation of some workers far more than others.

Bloom points out that “it’s not just the top 1% who are pulling away. The gap between workers with a college education and ones with only a high school diploma has increased dramatically as well. In 1979, the average annual salary for American men with a college degree was $17,411 higher (after adjusting for inflation) than the average for men with a high school degree. By 2012, the gap had nearly doubled, to almost $35,000; the gap between women with college degrees and those with high school diplomas nearly doubled as well.”

So what explains this growing gap?

Over the past several years, economists have begun to examine pay gaps between and within firms to see how company strategy and corporate trends affect the broader rise of inequality. The findings from this new area of study are striking and help explain why incomes have risen so much for some and not at all for others. They also explain why so many executives, managers, and other well-paid workers have failed to notice the growing disparity.

Companies can contribute to rising income inequality in two ways. As we’ve just discussed, pay gaps can increase within companies — between how much executives and administrative assistants are paid, for example. But studies now show that gaps between companies are the real drivers of income inequality. Research I conducted with Jae Song, David Price, Fatih Guvenen, and Till Von Wachter looked at U.S. employers and employees from 1978 to 2013. We found that the average wages at the firms employing individuals at the top of the income distribution have increased rapidly, while those at the firms employing people in the lower income percentiles have increased far less. (See exhibit “Inequality Between Companies Is Also Growing.”)

This means that the rising gap in pay between firms accounts for the large majority of the increase in income inequality in the United States. It also accounts for at least a substantial part in other countries, as research conducted in the UK, Germany, and Sweden demonstrates. 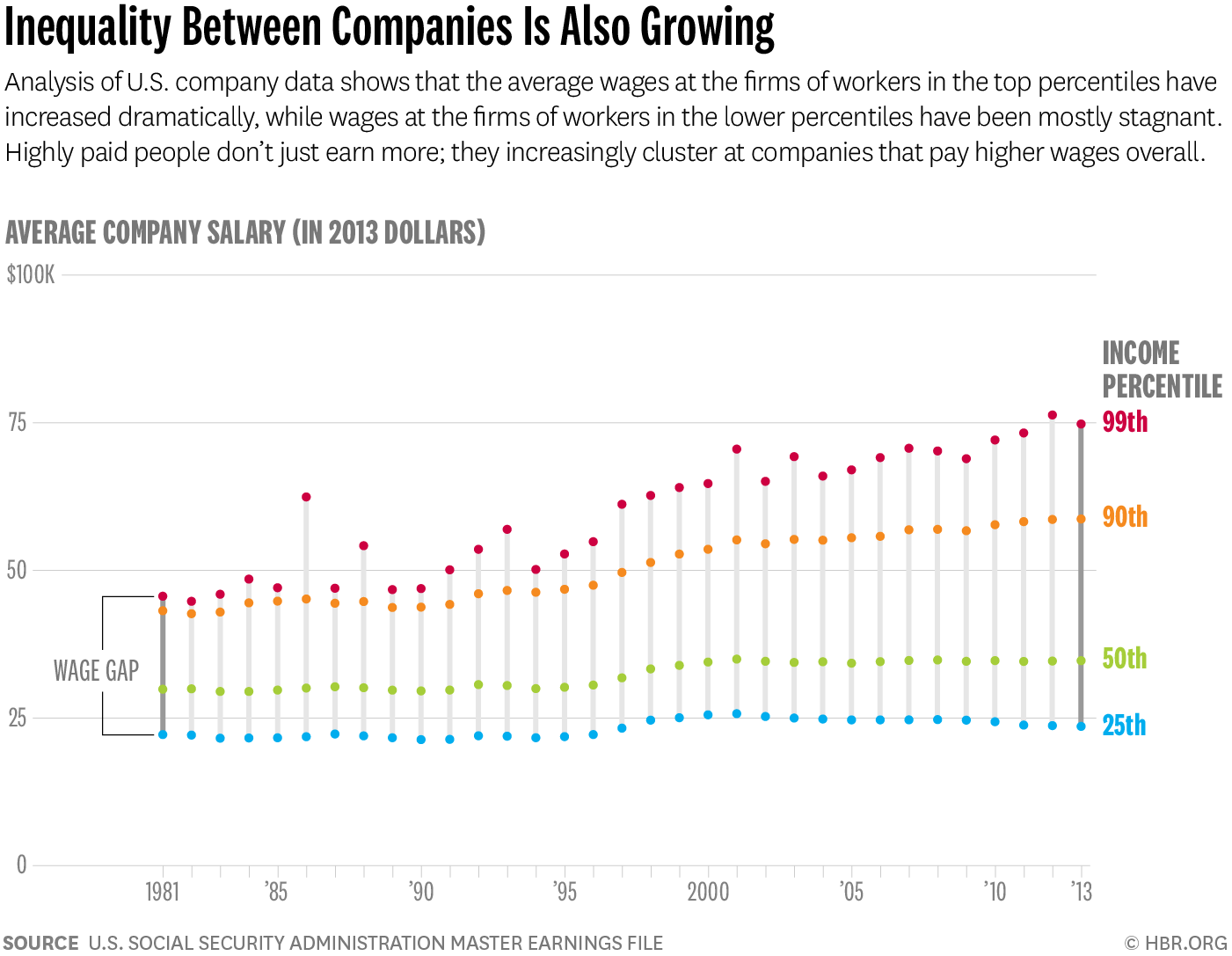 Bloom writes, “[O]ur research suggests…that companies are paying more to get more: boosting salaries to recruit top talent or to add workers with sought-after skills. The result is that highly skilled and well-educated workers flock to companies that can afford to offer generous salaries, benefits, and perks — and further fuel their companies’ momentum. Employees in less-successful companies continue to be poorly paid and their companies fall further behind.

Bloom attributes this between-firm inequality to “three factors: the rise of outsourcing, the adoption of IT, and the cumulative effects of winner-take-most competition”:

Bloom ends by listing several policy recommendations. There is also a link to further commentary on this subject by various experts, all of which are worth reading.

This is an important insight in the inequality debate. Policymakers and voters should take notice.