The World Bank’s latest Doing Business report has been released. The report “measures regulations affecting 11 areas of the life of a business. Ten of these areas are included in this year’s ranking on the ease of doing business: starting a business, dealing with construction permits, getting electricity, registering property, getting credit, protecting minority investors, paying taxes, trading across borders, enforcing contracts and resolving insolvency. Doing Business also measures labor market regulation, which is not included in this year’s ranking.”

Its key findings are as follows:

A number of things jumped out at me. First off, the rankings of the oft-praised Nordic countries, particularly Denmark and Sweden. See how those two countries compare to the U.S. below.

Denmark ranks higher than the United States with Sweden only a spot behind.1 Yet, in both Denmark and Sweden it is easier to

As Will Wilkinson put it, “[Y]ou cannot finance a Danish-style welfare state without free markets and large tax increases on the middle class. If you want Danish levels of social spending, you need Danish middle-class tax rates and a relatively unfettered capitalist economy.”

However, the next few graphs are probably some of the most interesting bits of the report: 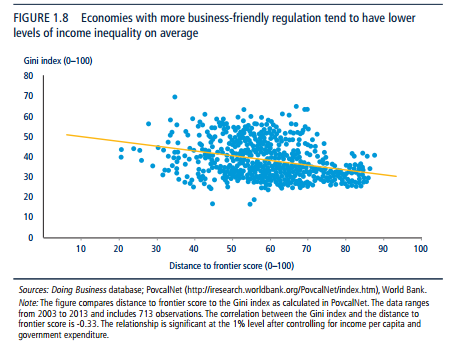 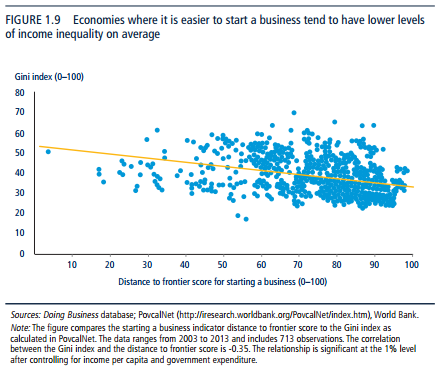 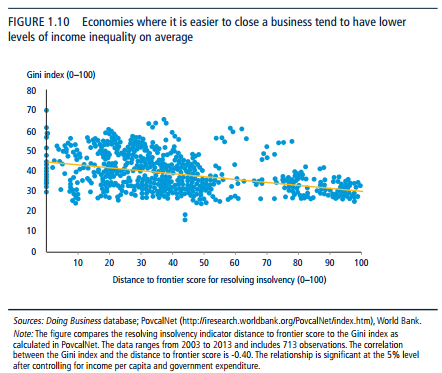 As the report explains,

research shows that where business regulation is simpler and more accessible, firms start smaller and firm size can be a proxy for the income of the entrepreneur. Doing Business data confirms this notion. There is a negative association between the Gini index, which measures income inequality within an economy, and the distance to frontier score, which measures the quality and efficiency of business regulation when the data are compared over time (figure 1.8).

Data across multiple years and economies show that as economies improve business regulation, income inequality tends to decrease in parallel. Although these results are associations and do not imply causality, it is important to see such relation. The results differ by regulatory area. Facilitating entry and exit in and out of the market—as measured by the starting a business and resolving insolvency indicators—have the strongest link with income inequality reduction (figures 1.9 and 1.10). These two Doing Business indicators are focused on equalizing opportunities and access to markets (pgs. 11-12).

I recommend taking a look at the data for yourself. Lots of good stuff.