Over 20 years ago, economists Deirdre (then Donald) McCloskey and Arjo Klamer argued that a quarter of GDP is due to “persuasion”: the sweet talk that is inherent in economic activity and transactions. A 2013 report by the Australian Treasury updates their findings and concludes that 30% of U.S. GDP is persuasion: 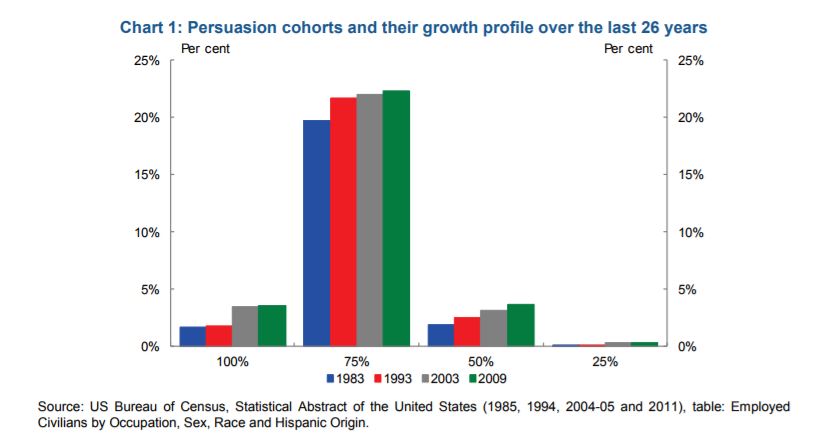 How much of national output is attributable to persuasion? McCloskey and Klamer derive an estimate through the production measure of GDP: the ‘more obviously “talkie” parts of production are a large part of production for final consumption, and much of it is persuasion rather than information or command’. And since these ‘talkie’ parts, such as wholesale and retail trade, finance and general government, add up to 58 per cent of US GDP in 1991, they conjecture that ‘it would not be hard to see … a figure of about a quarter (of GDP) devoted to persuasion’ (p. 193).

An alternative guess could be made from the income side of the national accounts — GDP(I). Since the persuasion content of employment is 30 per cent and the proportion of national income accruing to labour is around 60 per cent in the US (Jacobson and Occhino (2012)), that gives the labour income component of persuasion in the national accounts of around 18 per cent. If a fifth to one-quarter of capital income represents persuasive activity, that accounts for another 8-10 per cent (that is 20-25 per cent x (1-0.6)) of persuasion in GDP(I).7 The digital economy’s rapid advance has meant that brand names, commercial trademarks and other intellectual property are playing a bigger role in economic transactions and by their nature may not be well reflected in the national accounts. Therefore it is quite possible that the persuasion content of GDP may now be closer to 30 per cent.

While it is likely that persuasion GDP has risen above one quarter, it also bears entertaining the possibility that some of that effort could be dissipated by economic contests and positioning à la Skaperdas and Vaidya (2009).

Since the inspired guesstimate of McCloskey and Klamer, the economics profession launched itself into modelling many aspects of persuasion. Insights are to be had for sure, particularly in how regulators might mandate minimum product or service disclosure standards or how persuasion is deployed in economic contests. There might even be lessons as to how to communicate difficult economic reform proposals and how to navigate tricky political economy landscapes.

But as McCloskey (2011) suggests, some research effort may be falling back into the trap of treating persuasion as just another factor in formal optimisation exercises. In that sense, McCloskey and Klamer’s (1995) original hope remains unrealised. They had hoped that a renewed awareness of the importance of persuasion might encourage the modern economist to augment her technical tools of trade by taking seriously the potential of language in economic discourse and by utilising the power of interpretation in distinguishing between competing ‘hard results’. In this way, McCloskey’s agenda goes beyond evidence-based policy evaluations, useful and necessary as they are in policy discourse.

On a positive note, might it be time to update the McCloskey-Klamer catch phrase to ’30 per cent of GDP is persuasion’? Such renewed speculation would of course merely inform because the persuading was eloquently done by McCloskey and Klamer.