Earlier this year, I highlighted a 2016 study that unsurprisingly found that professors vote Democrat. The same researchers released an updated version of the study, having accidentally omitted two Florida universities. Of course, this didn’t change the outcome much:

The findings for the two omitted Florida universities, the University of Miami and the University of Florida, are consistent with the findings in our initial sample of 40 institutions. With the present addendum, our revised investigation now covers 42 top universities. In the new grand set, the either registered-Democrat-or-registered-Republican faculty from the newly added universities constitutes 6.1 percent of that of faculty of all 42 schools. As it turns out, the overall Democrat to Republican ratio (or, D:R ratio) changes so little that it is the same to the first decimal point, 11.5:1. Three of the five disciplinary ratios change slightly (pg. 56). 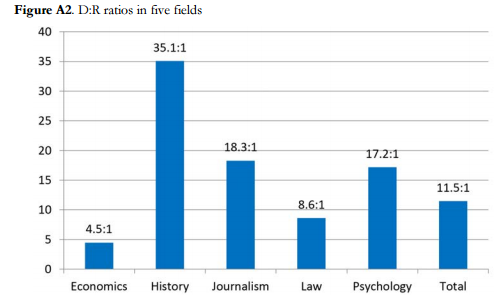 These findings are consistent with previous research. As I pointed out in my last post, economics departments tend to be more politically diverse than other social sciences. You can see the political diversity of various departments below, with the most diverse toward the bottom.