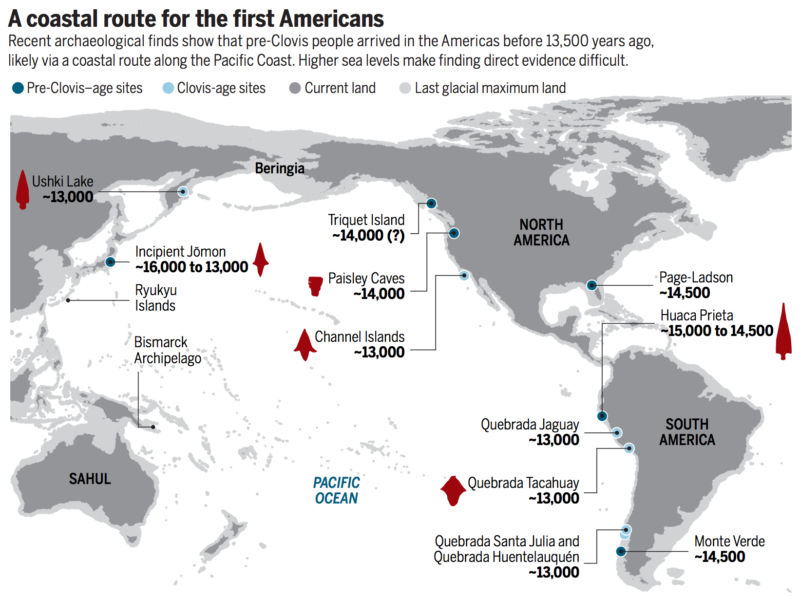 So this is interesting:

It’s been one of the most contentious debates in anthropology, and now scientists are saying it’s pretty much over. A group of prominent anthropologists have done an overview of the scientific literature and declare in Science magazine that the “Clovis first” hypothesis of the peopling of the Americas is dead.

For decades, students were taught that the first people in the Americas were a group called the Clovis who walked over the Bering land bridge about 13,500 years ago. They arrived (so the narrative goes) via an ice-free corridor between glaciers in North America. But evidence has been piling up since the 1980s of human campsites in North and South America that date back much earlier than 13,500 years. At sites ranging from Oregon in the US to Monte Verde in Chile, evidence of human habitation goes back as far as 18,000 years.

In the 2000s, overwhelming evidence suggested that a pre-Clovis group had come to the Americans before there was an ice-free passage connecting Beringia to the Americas. As Smithsonian anthropologist Torben C. Rick and his colleagues put it, “In a dramatic intellectual turnabout, most archaeologists and other scholars now believe that the earliest Americans followed Pacific Rim shorelines from northeast Asia to Beringia and the Americas.”

Now scholars are supporting the “kelp highway hypothesis,” which holds that people reached the Americas when glaciers withdrew from the coasts of the Pacific Northwest 17,000 years ago, creating “a possible dispersal corridor rich in aquatic and terrestrial resources.” Humans were able to boat and hike into the Americas along the coast due to the food-rich ecosystem provided by coastal kelp forests, which attracted fish, crustaceans, and more.

No one disputes that the Clovis peoples came through Beringia and the ice free corridor. But the Clovis would have formed a second wave of immigrants to the continent.