Not really, despite what Nicholas Kristof has recently claimed. As W. Brad Wilcox of the University of Virginia explains,

Here, Kristof is indebted to a book by family scholars Naomi Cahn and June Carbone, Red Families v. Blue Families, which makes the case that blue states have more successful and stable families than do red states. Arkansas, for instance, has one of the highest divorce rates in the nation, whereas Massachusetts has one of the lowest.

…But this state-based argument obscures more than it illuminates about the links between partisanship and family life for ordinary families in America. Scholars and journalists who have bought into the idea that red Americans are hypocrites on family values because some red states do poorly when it comes to family stability are committing what is called the “ecological fallacy” of conflating the family behaviors of individual conservatives with the family behaviors of states dominated by conservatives.

…Indeed, when we look not at states but at counties in the United States, we see that counties that lean Republican across the country as a whole have more marriage, less nonmarital childbearing, and more family stability than counties that lean Democratic. In fact, an Institute for Family Studies report I authored found, “teens in red counties are more likely to be living with their biological parents, compared to children living in bluer counties.” So, even at the community level, the story about marriage and family instability looks a lot different depending on whether or not one is looking at state or county trends. At the county level, then, the argument that Red America is doing worse than Blue America isn’t true.

Finally, when we turn to the individual level, the conservatives-are-family-values-hypocrites thesis really falls apart. Republicans are more likely to be married, and happily married, than independents and Democrats, as Nicholas Wolfinger and I recently showed in a research brief for the Institute for Family Studies. They are also less likely to cheat on their spouses and less likely to be divorced, compared with independents and Democrats. So, Donald Trump is the exception, not the norm, for Republicans. 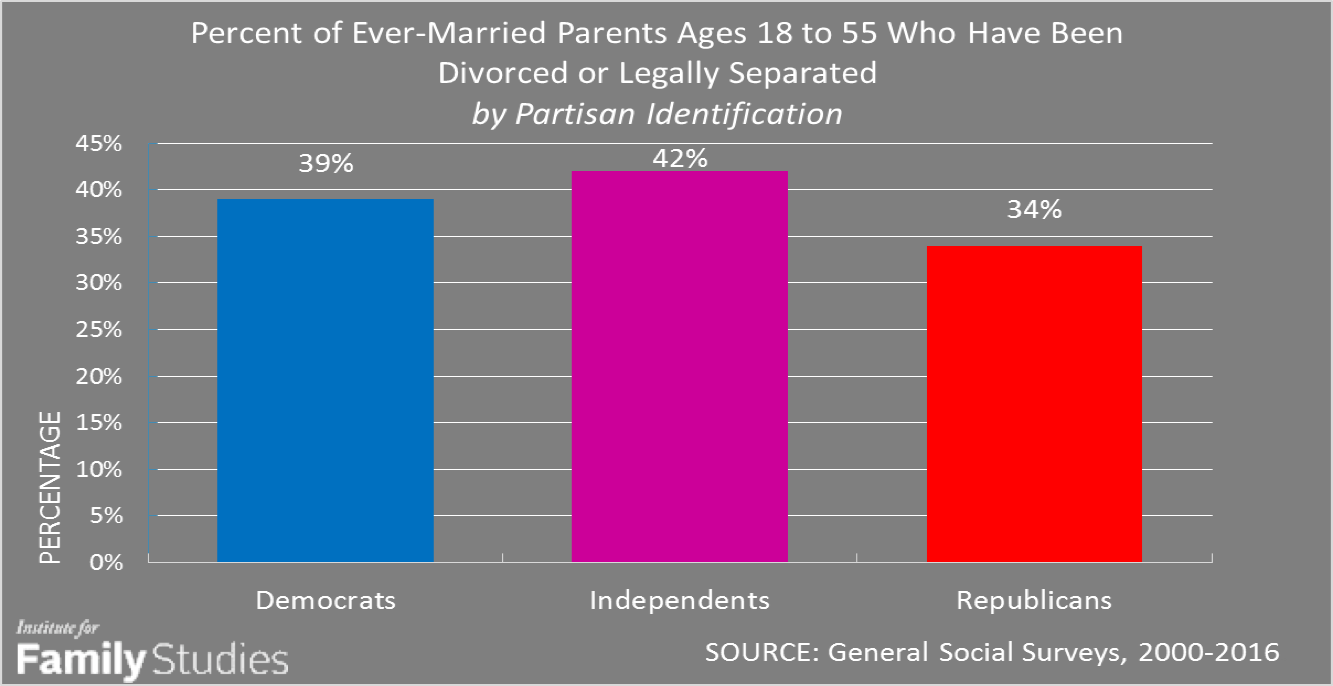 “[B]ecause married parents are more prosperous and less dependent on government for their financial security,” he writes, “[Republicans] are less likely to gravitate to the Democratic Party and more likely to gravitate to the party of small government and lower taxes. Indeed, counties with large numbers of lower-income single parents are more likely to lean Democratic, partly because the Democratic Party supports policies designed to provide them with more financial security. The figure below is illustrative of the link between family structure and voting at the county level in 2016.” 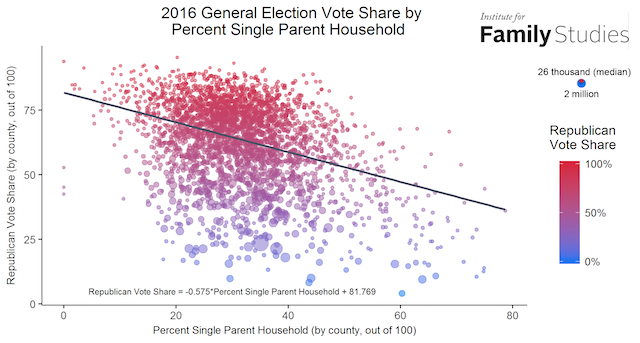 Wilcox highlighted this last point in a City Journal article back in July:

The problem with the progressive approach to poverty is that it denies the importance of culture and character to household prosperity—especially when it comes to marriage…Wendy Wang of the Institute for Family Studies and I recently co-authored a report, The Millennial Success Sequence, which demonstrates and quantifies the extent to which early life choices correlate with personal affluence. Though young people take a variety of paths into adulthood—arranging school, work, and family in a dizzying array of combinations—one path stood out as most likely to be linked to financial success for young adults. Brookings scholars Ron Haskins and Isabel Sawhill have identified the “success sequence,” through which young adults who follow three steps—getting at least a high school degree, then working full-time, and then marrying before having any children, in that order—are very unlikely to become poor. In fact, 97 percent of millennials who have followed the success sequence are not in poverty by the time they reach the ages of 28 to 34.

Sequence-following millennials are also markedly more likely to flourish financially than their peers taking different paths; 89 percent of 28-to-34 year olds who have followed the sequence stand at the middle or upper end of the income distribution, compared with just 59 percent of Millennials who missed one or two steps in the sequence. The formula even works for young adults who have faced heavier odds, such as millennials who grew up poor, or black millennials; despite questions regarding socioeconomic privilege, our research suggests that the success sequence is associated with better outcomes for everyone. For instance, only 9 percent of black millennials who have followed the three steps of the sequence, or who are on track with the sequence (which means they have at least a high school degree and worked full-time in their twenties, but have not yet married or had children) are poor, compared with a 37 percent rate of poverty for blacks who have skipped one or two steps. Likewise, only 9 percent of young men and women from lower-income families who follow the sequence are poor in their late twenties and early thirties; by comparison, 31 percent of their peers from low-income families who missed one or two steps are now poor.

…Young men and (especially) women who put “marriage before the baby carriage” get access to the financial benefits of a partnership—income pooling, economies of scale, support from kinship networks—with fewer of the risks of an unmarried partnership, including breakups. By contrast, millennials who have a baby outside of marriage—even in a cohabiting union—are likelier to end up as single parents or paying child support, both of which increase the odds of poverty. One study found that cohabiting parents were three times more likely to break up than were married parents by the time their first child turned five: 39 percent of cohabiting parents broke up, versus 13 percent of married parents in the first five years of their child’s life. The stability associated with marriage, then, tends to give millennials and their children much more financial security.

In a Hoover Institute interview, Yuval Levin commented, “Today’s progressivism–for all of its talk of communitarianism and of ‘we’ and of ‘You didn’t build that’–the purpose of it really is to liberate the individual from dependence on other people. It is in fact based on a very radical individualism that at the end of the day wants total moral individualism and is willing to abide some economic collectivism to get there.”1 The data above seem to confirm this suspicion.

2 thoughts on “Are Democrats Outdoing Republicans When It Comes to Family Values?”