Stephen Prothero, Religious Literacy: What Every American Needs to Know–And Doesn’t (HarperCollins, 2007): “The United States is one of the most religious places on earth, but it is also a nation of shocking religious illiteracy.

Despite this lack of basic knowledge, politicians and pundits continue to root public policy arguments in religious rhetoric whose meanings are missed—or misinterpreted—by the vast majority of Americans. “We have a major civic problem on our hands,” says religion scholar Stephen Prothero. He makes the provocative case that to remedy this problem, we should return to teaching religion in the public schools. Alongside “reading, writing, and arithmetic,” religion ought to become the “Fourth R” of American education. Many believe that America’s descent into religious illiteracy was the doing of activist judges and secularists hell-bent on banishing religion from the public square. Prothero reveals that this is a profound misunderstanding. “In one of the great ironies of American religious history,” Prothero writes, “it was the nation’s most fervent people of faith who steered us down the road to religious illiteracy. Just how that happened is one of the stories this book has to tell.” Prothero avoids the trap of religious relativism by addressing both the core tenets of the world’s major religions and the real differences among them. Complete with a dictionary of the key beliefs, characters, and stories of Christianity, Islam, and other religions, Religious Literacy reveals what every American needs to know in order to confront the domestic and foreign challenges facing this country today” (Amazon). 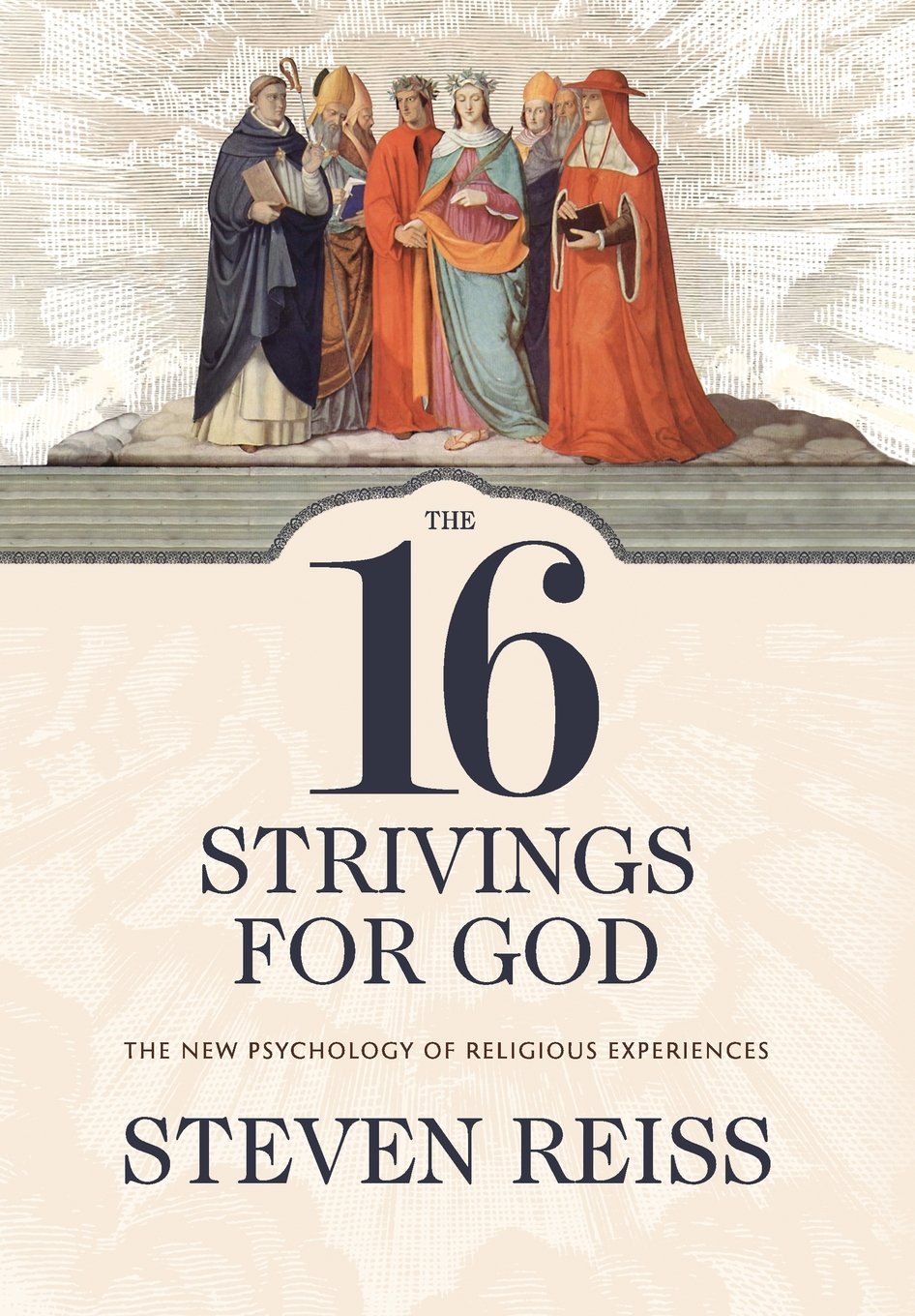 Steven Reiss, The 16 Strivings for God: The New Psychology of Religious Experience (Mercer University Press, 2015): “This ground-breaking work will change the way we understand religion. Period. Previous scholars such as Freud, James, Durkheim, and Maslow did not successfully identify the essence of religion as fear of death, mysticism, sacredness, communal bonding, magic, or peak experiences because religion has no single essence. Religion is about the values motivated by the sixteen basic desires of human nature. It has mass appeal because it accommodates the values of people with opposite personality traits. This is the first comprehensive theory of the psychology of religion that can be scientifically verified. Reiss proposes a peer-reviewed, original theory of mysticism, asceticism, spiritual personality, and hundreds of religious beliefs and practices. Written for serious readers and anyone interested in psychology and religion (especially their own), this eminently readable book will revolutionize the psychology of religious experience by exploring the motivations and characteristics of the individual in their religious life” (Amazon).

Alfred R. Mele, Free: Why Science Hasn’t Disproved Free Will (Oxford University Press, 2014): “Does free will exist? The question has fueled heated debates spanning from philosophy to psychology and religion. The answer has major implications, and the stakes are high. To put it in the simple terms that have come to dominate these debates, if we are free to make our own decisions, we are accountable for what we do, and if we aren’t free, we’re off the hook. There are neuroscientists who claim that our decisions are made unconsciously and are therefore outside of our control and social psychologists who argue that myriad imperceptible factors influence even our minor decisions to the extent that there is no room for free will. According to philosopher Alfred R. Mele, what they point to as hard and fast evidence that free will cannot exist actually leaves much room for doubt. If we look more closely at the major experiments that free will deniers cite, we can see large gaps where the light of possibility shines through. In Free: Why Science Hasn’t Disproved Free Will, Mele lays out his opponents’ experiments simply and clearly, and proceeds to debunk their supposed findings, one by one, explaining how the experiments don’t provide the solid evidence for which they have been touted. There is powerful evidence that conscious decisions play an important role in our lives, and knowledge about situational influences can allow people to respond to those influences rationally rather than with blind obedience. Mele also explores the meaning and ramifications of free will. What, exactly, does it mean to have free will — is it a state of our soul, or an undefinable openness to alternative decisions? Is it something natural and practical that is closely tied to moral responsibility? Since evidence suggests that denying the existence of free will actually encourages bad behavior, we have a duty to give it a fair chance” (Amazon).

Brink Lindsey, Human Capitalism: How Economic Growth Has Made Us Smarter–and More Unequal (Princeton University Press, 2013): “What explains the growing class divide between the well educated and everybody else? Noted author Brink Lindsey, a senior scholar at the Kauffman Foundation, argues that it’s because economic expansion is creating an increasingly complex world in which only a minority with the right knowledge and skills–the right “human capital”–reap the majority of the economic rewards. The complexity of today’s economy is not only making these lucky elites richer–it is also making them smarter. As the economy makes ever-greater demands on their minds, the successful are making ever-greater investments in education and other ways of increasing their human capital, expanding their cognitive skills and leading them to still higher levels of success. But unfortunately, even as the rich are securely riding this virtuous cycle, the poor are trapped in a vicious one, as a lack of human capital leads to family breakdown, unemployment, dysfunction, and further erosion of knowledge and skills. In this brief, clear, and forthright eBook original, Lindsey shows how economic growth is creating unprecedented levels of human capital–and suggests how the huge benefits of this development can be spread beyond those who are already enjoying its rewards” (Amazon). 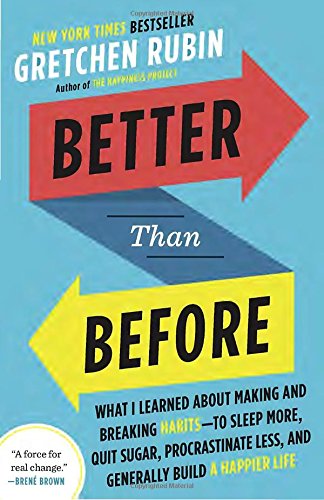 Gretchen Rubin, Better Than Before: What I Learned About Making and Breaking Habits–to Sleep More, Quit Sugar, Procrastinate Less, and Generally Build a Happier Life (Broadway Books, 2015): “How do we change? Gretchen Rubin’s answer: through habits. Habits are the invisible architecture of everyday life. It takes work to make a habit, but once that habit is set, we can harness the energy of habits to build happier, stronger, more productive lives. So if habits are a key to change, then what we really need to know is: How do we change our habits? Better than Before answers that question. It presents a practical, concrete framework to allow readers to understand their habits—and to change them for good. Infused with Rubin’s compelling voice, rigorous research, and easy humor, and packed with vivid stories of lives transformed, Better than Before explains the (sometimes counter-intuitive) core principles of habit formation. Along the way, Rubin uses herself as guinea pig, tests her theories on family and friends, and answers readers’ most pressing questions—oddly, questions that other writers and researchers tend to ignore:

Whether readers want to get more sleep, stop checking their devices, maintain a healthy weight, or finish an important project, habits make change possible. Reading just a few chapters of Better Than Before will make readers eager to start work on their own habits—even before they’ve finished the book” (Amazon).

Drew Magary, The Hike: A Novel (Penguin, 2016): “When Ben, a suburban family man, takes a business trip to rural Pennsylvania, he decides to spend the afternoon before his dinner meeting on a short hike. Once he sets out into the woods behind his hotel, he quickly comes to realize that the path he has chosen cannot be given up easily. With no choice but to move forward, Ben finds himself falling deeper and deeper into a world of man-eating giants, bizarre demons, and colossal insects. On a quest of epic, life-or-death proportions, Ben finds help comes in some of the most unexpected forms, including a profane crustacean and a variety of magical objects, tools, and potions. Desperate to return to his family, Ben is determined to track down the “Producer,” the creator of the world in which he is being held hostage and the only one who can free him from the path. At once bitingly funny and emotionally absorbing, Magary’s novel is a remarkably unique addition to the contemporary fantasy genre, one that draws as easily from the world of classic folk tales as it does from video games. In The Hike, Magary takes readers on a daring odyssey away from our day-to-day grind and transports them into an enthralling world propelled by heart, imagination, and survival” (Amazon).