From a new NBER working paper:1 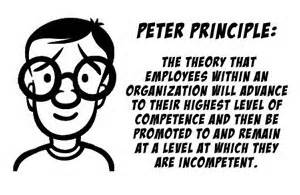 Because managers and workers apply different skills, the best workers may not be the best candidates for managers. When this is the case, do firms promote someone who excels in her current position, or someone who is likely to excel as a manager? If firms promote based on current performance, then firms may end up with worse managers. Yet if firms promote based on traits that predict managerial potential, then firms may pass over higher performing workers, weakening the power of promotions to encourage workers to perform well in their current roles. Such promotion policies could also lead to perceptions of favoritism, unfairness, or that succeeding in one’s job goes unrewarded.

Using detailed microdata on sales workers in US firms, we provide the first large scale empirical evidence suggesting that firms prioritize current performance in promotion decisions at the expense of promoting the best potential managers. Our findings are consistent with the “Peter Principle,” which, in its extreme form, states that firms promote competent workers until they become incompetent managers (Peter and Hull 1969).

…Overall, our empirical findings are consistent with the Peter Principle: firms promote based on current job performance even though pre-promotion sales negatively predicts managerial performance and other observable characteristics positively predict managerial performance. We caution that our results do not imply that firms use suboptimal promotion policies or have mistaken beliefs. Promotion policies that favor strong sales performance may provide a variety of incentive benefits that justify the costs of managerial mismatch. For example, promoting based on current job performance may help preserve tournament incentives (Lazear and Rosen 1981). Prioritizing objective performance measures in promotions may also improve incentives by avoiding favoritism (Prendergast 1998) and maintaining fairness norms. Promotion policies based on verifiable performance metrics such as sales may also discourage the manipulation of other, more fungible performance metrics such as credit sharing and collaboration experience (DeVaro and Gurtler 2015). What our results do show is that the costs of not promoting the best potential managers are high: our estimates suggest that firms are willing to forgo up to a 30% improvement in subordinate performance to achieve better incentives or to avoid costly politicking.

…This study offers the first empirical tests of the Peter Principle using data on promotions across a large number of firms. Although theoretical work and reviews have hypothesized that promotions based upon current job performance may yield managerial mismatch (Fairburn and Malcomson 2001; Waldman 2003; Lazear 2004), scant empirical research has tested the Peter Principle directly. Our work is most closely related to Grabner and Moers (2013), which shows that a bank places less weight on current job performance when a promotion would be to a job performing dissimilar tasks. However, Grabner and Moers uses data from a single firm and does not attempt to estimate the cost of the Peter Principle. Understanding the costs associated with the Peter Principle is important because it helps explain a variety of organizational practices, such as the use of parallel job ladders for individual contributors and managers, or the use of separate evaluation criteria for performance (which are often tied to bonuses) and potential (which are often tied to promotions) (pgs. 1-5).

Being a good worker does not mean one will be a good manager.