The question is cheeky, but appropriate given how “check your privilege” is all the rage. A new working paper suggests that high unemployment rates are actually found in wealthy countries rather than poorer ones. The researchers summarize,

[C]laims about unemployment in poorer countries are all over the map, with some studies finding that the highest unemployment rates in the world are in Sub-Saharan Africa, at around 30% per year (World Bank 2004), while others posit that unemployment is almost non-existent in developing countries, since people there are too poor to have the luxury of not working (Fields 2004, Squire 1981).

In our paper (Feng et al. 2018), we contribute to the study of unemployment by building a data set of average unemployment rates covering 84 countries of all income levels.  To address the issue of data comparability, we intentionally bypass existing data banks, such as those of the ILO, and build our own measures of unemployment from the ground up using household survey data. We draw on 199 nationally representative household surveys conducted in various recent years (but mostly between 2000 and 2010). Importantly, our data cover not just the rich countries of the world, but many poor nations, including a dozen from sub-Saharan Africa and many more from the middle of the world income distribution.

…We define work as wage employment, self-employment, and unpaid work in a family farm or business. We exclude those doing home production of services like cooking, cleaning, and childcare. Our search measures cover job search activity in some recent period, like the last week (in our preferred metrics). We compute unemployment rates in each survey as the number of adults not working but searching for work / (number working + those not working and searching). We then average over all surveys for each county in our data.

What we find is that average unemployment rates are in fact substantially lower in poor countries than in rich countries. In the poorest quartile of the world income distribution, unemployment averages around 2.5%, while in the richest quartile, around 8% of the labour force is unemployed on average. Interestingly, we find that the higher unemployment rates of richer economies hold for workers of all ages, for men and women separately, and within both urban and rural areas. Thus, our data suggest that unemployment is largely a rich-country phenomenon, rather than a feature of underdevelopment.

Why is this the case?

The figure below plots the ratio of unemployment for the low educated to that of the high educated against the log of GDP per capita. In the poorest countries, this ratio is below one, meaning that the low educated are less likely to be unemployed than the high educated. The exact opposite is true of the richest countries, all of whom have ratios above one. For instance, in the US, the ratio is 2.3, meaning that those without high school education are more than twice as likely to unemployed as those that finished high school (or went on to college or beyond). Whereas one might have thought this pattern is a universal feature of labour market outcomes, our data show that unemployment concentrated among the less educated is actually confined to richer economies. 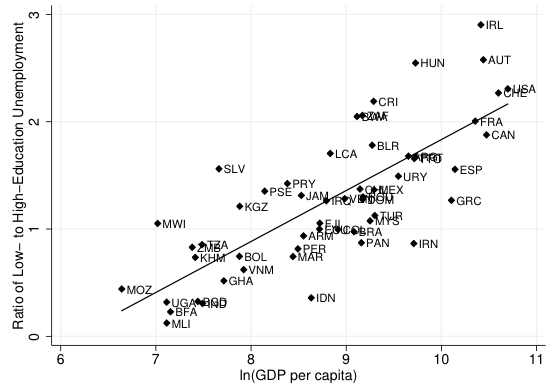 Countries differ only by their productivity in the modern sector, with the traditional sector offering the same (low) level of output per worker in all countries. This assumption is central to our analysis and based on the emerging consensus that cross-country productivity differences are skill-biased, rather than affecting unskilled and skilled tasks and workers equally (Caselli and Coleman 2006, Malmberg 2016).

The model predicts that in countries with low modern-sector productivity levels, the bulk of the workforce sorts into the traditional sector. Only workers with the highest skill levels choose the modern sector. Then, as modern-sector productivity rises – our proxy for ‘development’ – more and more lower skilled workers are drawn into the modern sector. This raises overall unemployment, as more workers now search for jobs, with some of them being unemployed each period in equilibrium. As in the data, our model predicts that development also brings a rise in the ratio of unemployment for the less- to more-skilled. The reason is most of the higher skilled workers are already in the modern sector and searching for wage jobs in poor economies. As modern-sector productivity grows, it is the less skilled workers that switch sectors, and their unemployment rate rises faster as a result.

Our research suggests that unemployment is largely a feature of advanced economies. In poor countries, only the most skilled workers search for wage jobs, while most of the less skilled workers select into traditional self-employment activities. Thus, few workers in poor economies are actually unemployed in practice. In advanced economies, the modern wage-paying sectors have relatively high productivity levels and employ the bulk of the labour force. As a consequence, as modern firms and positions come and go, workers are occasionally cast into unemployment. While unemployment per se is undesirable, the high underlying productivity level of the modern sector is not.

Paul Krugman once famously said, “Productivity isn’t everything, but in the long run it is almost everything. A country’s ability to improve its standard of living over time depends almost entirely on its ability to raise its output per worker.”1 Harvard’s Greg Mankiw writes, “Almost all variation in living standards is attributable to differences in countries’ productivity[.]”2 This study demonstrates at least two important points: