From the Oxford Research Encyclopedia of Criminology and Criminal Justice,

Despite recent research that shows the lack of a direct connection between immigration and increases in crime, the American public still believes that immigrants are a dangerous group…Illegal immigration occurs when a person unlawfully enters the United States or overstays their visa once in the country; it is estimated that between 30 and 50% of undocumented immigrants in the United States have overstayed their visas (Blondell, 2008; Metcalf, 2011). The perception that “all” undocumented immigrants have nefariously crossed the U.S. border is not accurate. More refined analysis regarding legal and illegal immigration and crime has been done by researchers in recent years.

Researchers in the United States have begun to distinguish between the act of being an undocumented immigrant, which is illegal, and crimes committed by immigrants. Metcalf (2011), for example, found that if an undocumented immigrant is processed by an immigration court for deportation, deportation is most likely to actually occur if the person committed a serious felony. In other cases, the individual is likely to be released and will continue to unlawfully reside in the United States. Concern about crimes committed on or near the U.S. border has also resulted in some studies about the nexus among migration, victimization, and criminal offending. Hickman and Suttorp (2015) analyzed whether undocumented immigrants were more likely to be a recidivist one year after release from jail than nondeportable immigrants. Analyzing a month of data from the Los Angeles County Jail in 2002, they found that 21% of inmates were “foreign born.” For those whose immigration status was known, and for which the inmate was not released to another agency, about 60% of the inmates were nondeportable and 40% were deportable immigrants. One year after release from the county jail, deportable immigrants were no more a threat to public safety than immigrants who were nondeportable (Hickman & Suttorp, 2015). Hickman and Suttorp concluded that the fear that undocumented immigrants are a disproportionate threat to a community’s safety is not empirically supported by analysis of data for the immigrants subjected to criminal justice sanctions at a local jail level. The re-arrest rate for all the immigrants (both deportable and nondeportable) in their study was relatively low (about 38%).

I’ve covered this topic before, but it is worth revisiting. The above ORE article is from 2017, but is there even more recent evidence? As reported by NPR,1

Michael Light, a criminologist at the University of Wisconsin, Madison, looked at whether the soaring increase in illegal immigration over the last three decades caused a commensurate jump in violent crimes: murder, rape, robbery and aggravated assault. “Increased undocumented immigration since 1990 has not increased violent crime over that same time period,” Light said in a phone interview. Those findings are published in the current edition of the peer-reviewed journal Criminology. 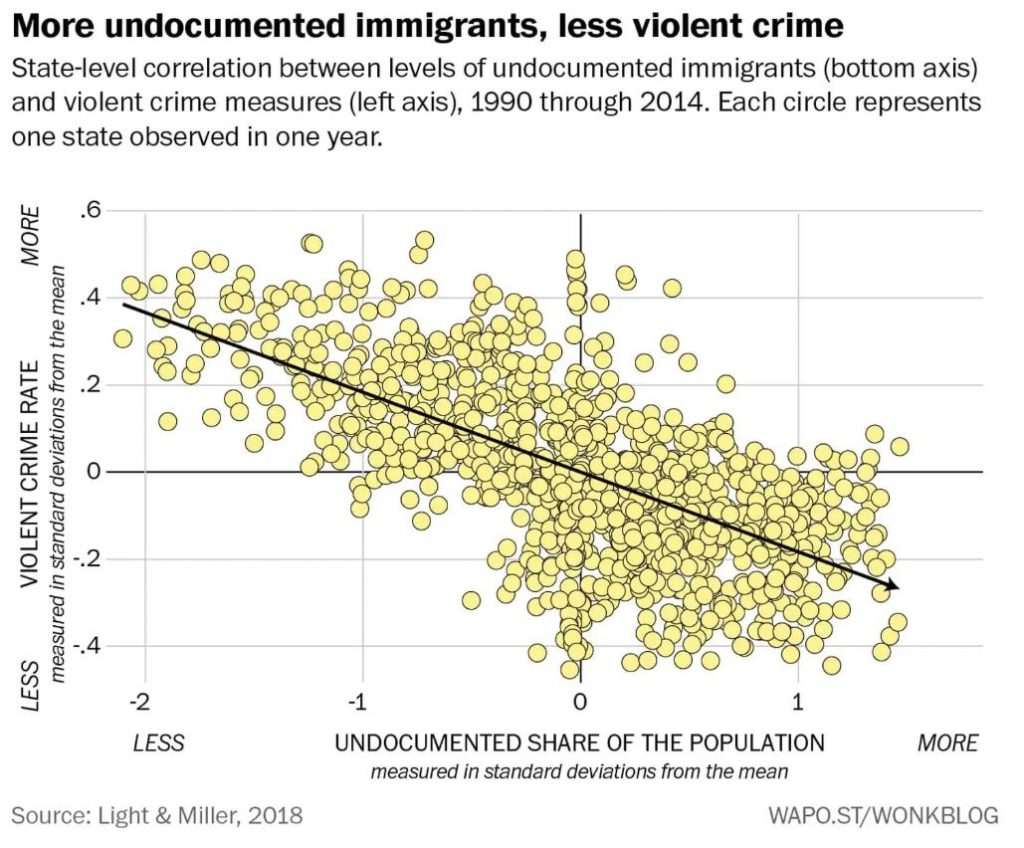 In a separate study, these same researchers previously looked at nonviolent crime. They found that the dramatic influx of undocumented immigrants, similarly, did not drive up rates of drug and alcohol arrests or the number of drug overdoses and DUI deaths. “We found no evidence that undocumented immigration increases the prevalence of any of those outcomes,” Light said.

A third study, by the libertarian Cato Institute, recently looked at criminality among undocumented immigrants just in Texas. The state records the immigration status of arrestees, creating a gold mine for criminologists. Cato found that in 2015, criminal conviction and arrest rates in Texas for undocumented immigrants were lower than those of native-born Americans for murder, sexual assault and larceny. 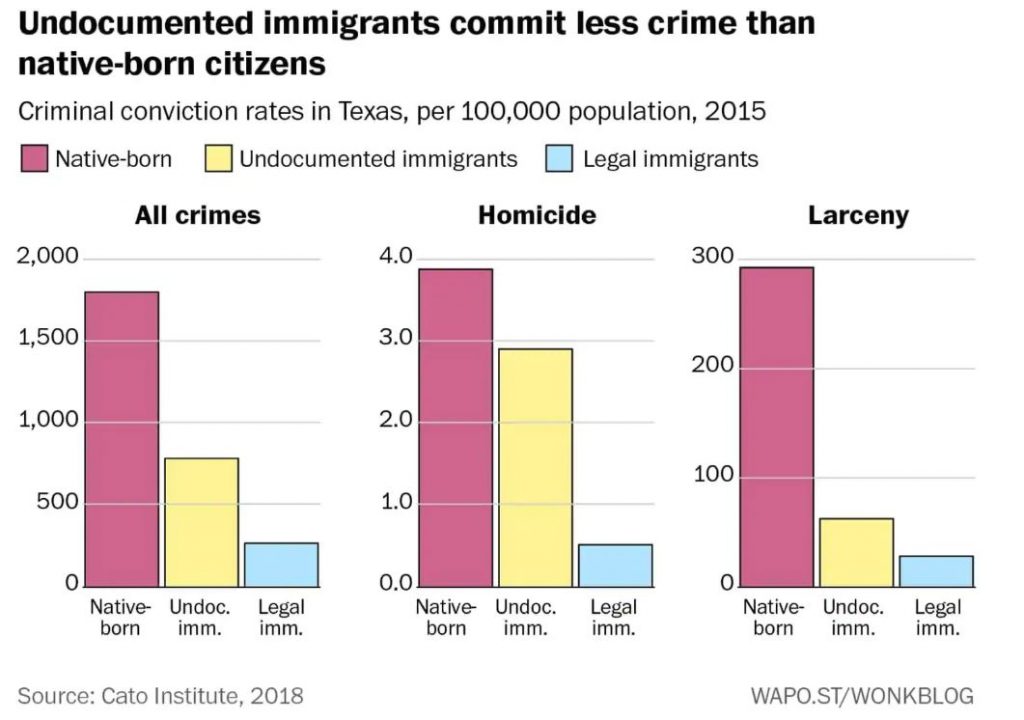 Finally, a research paper appearing in the current edition of the U.K. journal Migration Letters shows that youthful undocumented immigrants engage in less crime than do legal immigrants or U.S.-born peers.

As The Washington Post notes, “These two studies are far from the only ones showing that immigration, legal or otherwise, does not lead to rising crime. But the evidence they present is some of the strongest offered to date. The Trump administration, however, does not seem to be listening.”