From my BYU Studies Quarterly article:

A particularly interesting aspect of public attitudes toward immigration is that of political ignorance. Multiple studies have shown that political ignorance is rampant among average voters, and this holds true when it comes to immigration policy. As legal scholar Ilya Somin explains, “Immigration restriction . . . is one that has long-standing associations with political ignorance. In both the United States and Europe,survey data suggest that it is strongly correlated with overestimation of the proportion of immigrants in the population, lack of sophistication in making judgments about the economic costs and beneﬁts of immigration, and general xenophobic attitudes toward foreigners. By contrast, studies show that there is little correlation between opposition to immigration and exposure to labor market competition from recent immigrants.” One pair of economists found that those voting to leave the European Union in the Brexit referendum, who were motivated largely by a desire to restrict immigration, “were overwhelmingly more likely to live in areas with very low levels of migration.” Similarly, voters who supported Donald Trump during the US election were more likely to oppose liberalizing immigration laws (even compared to other Republicans), but least likely to live in racially diverse neighborhoods. In short, both political ignorance and lack of interaction with foreigners tend to inﬂame anti-immigration sentiments. These sentiments are what George Mason University economist Bryan Caplan refers to as antiforeign bias: “a tendency to underestimate the economic beneﬁts of interaction with foreigners.” In fact, economists take nearly the opposite view from the general public on immigration (pgs. 80-82).

In short, ignorance and fear of the unknown or “the other” (which ends up manifesting as racial resentment) lead to anti-immigration sentiments. Many have been quick to point out that economic anxieties did not play a significant role in the rise of Trump. Cultural values, for example, played a far more significant role. Evidence from Belgium also suggests that declinism–a negative view of the state and evolution of society–is far more important in predicting populist support than economic insecurities. Nonetheless, there is some evidence that economic downturns and uncertainty do lead to a rise in populism, particularly in Europe.1 Increases in unemployment following the Great Recession eroded trust in mainstream political parties in Europe and led to a rise in support for populist parties.  Harvard’s Dani Rodrik has made a case that economic globalization helped create a populist political backlash. A 2016 study looked at the political results of financial crises from 1870 to 2014. The authors conclude,

The evidence we uncover shows that financial crises put a strain on modern democracies. The typical political reaction is as follows: votes for far-right parties increase strongly, government majorities shrink, the fractionalization of parliaments rises and the overall number of parties represented in parliament jumps. These developments likely hinder crisis resolution and contribute to political gridlock. The resulting policy uncertainty may contribute to the much debated slow economic recoveries from financial crises. Financial crises are politically disruptive, even when compared to other economic crises. Indeed, we find no (or only slight) political effects of normal recessions and different responses in severe crises not involving a financial crash. In the latter, right wing votes do not increase as strongly and people rally behind the government. In the light of modern history, political radicalization, declining government majorities and increasing street protests appear to be the hallmark of financial crises. As a consequence, regulators and central bankers carry a big responsibility for political stability when overseeing financial markets. Preventing financial crises also means reducing the probability of a political disaster (pg. 245).

The same authors conducted a short follow-up study, which found

that financial crises of the past 30 years have been a catalyst of rightwing populist politics. Many of the now-prominent right-wing populist parties in Europe, such as the Lega Nord in Italy, the Alternative for Germany, the Norwegian Progress Party or the Finn’s Party are “children of financial crises”, having made their breakthrough in national politics in the years following a financial crash. We also find that the 2008 crisis triggered a wave of governments in which right-wing populists gained power, often as a coalition partner. As discussed, the crisis is just one of many potential factors explaining the recent successes of right-wing populism in Europe and beyond. Other drivers such as “cultural backlash”, the impact of globalization, rising inequality, and the refugee crisis of 2015 surely played a critical role too. However, “the rise of the right” in Europe since 2008 cannot be fully understood without considering the impact of the 2008 and 2011/2012 financial crises…A first potential explanation is that financial crises are perceived as inexcusable events that result from a failure of policies and regulation, rather than from an external shock. This leads to distrust in government and mainstream politics. Secondly, financial crises typically trigger creditor-debtor conflicts (Mian et al. 2014) and a rise in income and wealth inequality (Atkinson and Morelli 2010, 2011) to levels not observed in normal recessions. Thirdly, we know that financial crashes often involve large-scale bank bailouts and these are highly controversial and unpopular (e.g., Broz 2005). Such bail-out initiatives give traction to extremist ideas at the political fringe. In this environment of distrust, uncertainty and dissatisfaction, right-wing populists have learned to gain votes by offering seemingly simple solutions to complex problems, and by attributing blame to minorities or foreigners (pg. 8).

These findings fit with Martin Wolf’s observations in the Financial Times, which lay populism at the feet of “the financial crisis and consequent economic shocks. These not only had huge costs. They also damaged confidence in — and so the legitimacy of — financial and policymaking elites. These emperors turned out to be naked.” Using “unemployment, fiscal austerity, real incomes per head and private sector credit” as “indicators of post-crisis developments,” Wolf determines, “The four most adversely affected of these economies in the long term were (in order) Italy, Spain, the UK and US. Post-crisis, the most adversely affected were Spain, the US, Italy and the UK. Germany was the least affected by the crisis, with Canada and Japan close to it. It is not surprising, then, that Canada, Germany and Japan have been largely immune to the post-crisis surge in populism, while the US, UK, Italy and Spain have been less so, though the latter two have contained it relatively successfully.” 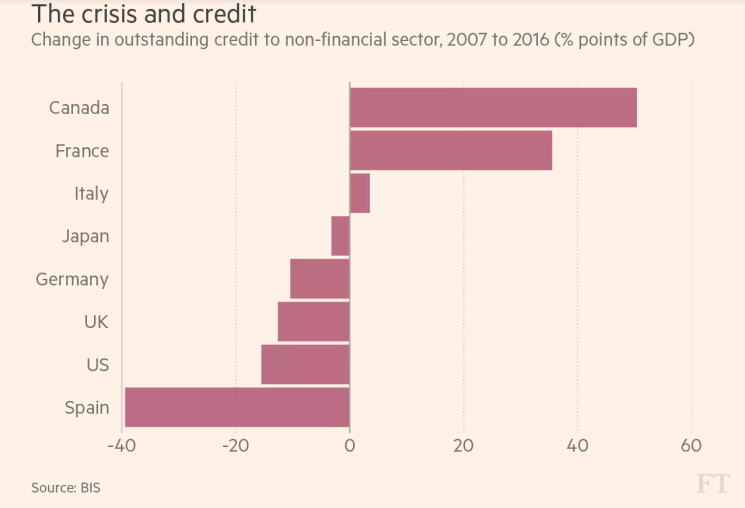 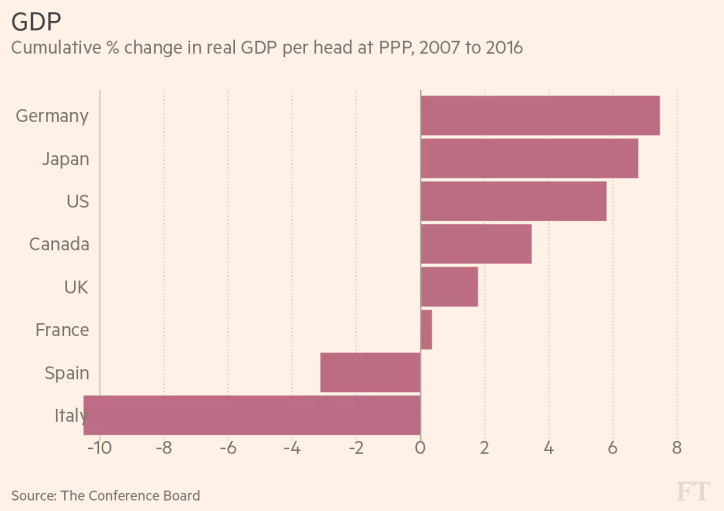 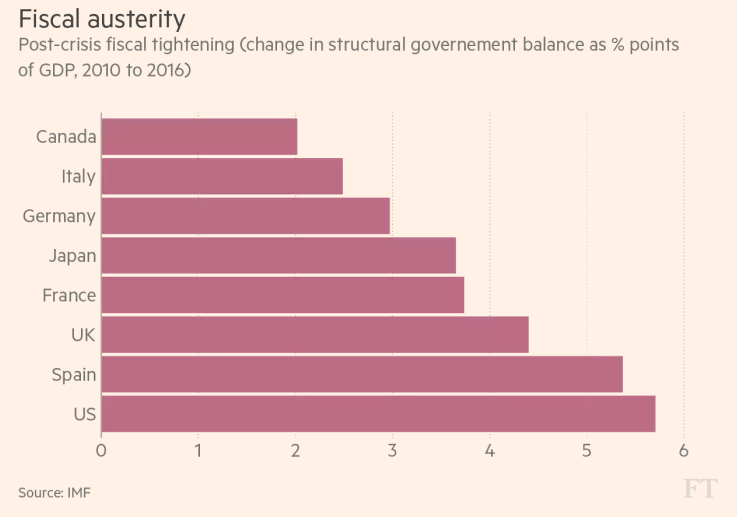 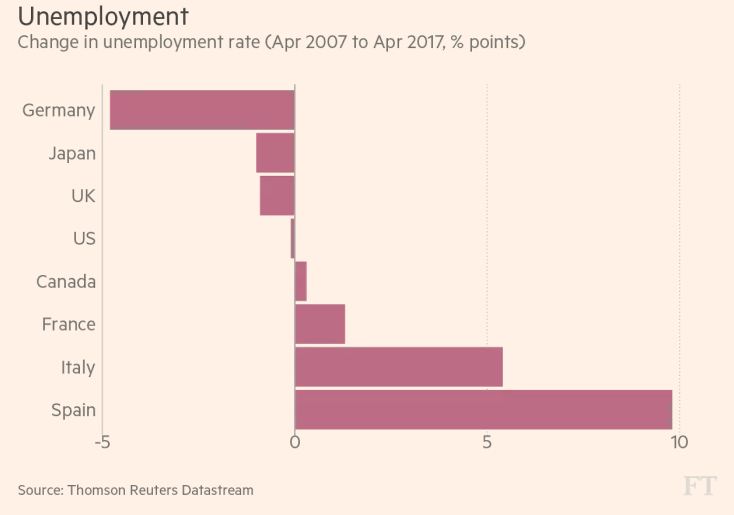 A more recent study supports these insights, “examin[ing] the role of the 2007–9 global financial crisis and its metastasis in Europe on voting and political beliefs in 220 subnational regions of 26 European countries.” It finds

a strong correlation between rising regional unemployment and voting for non-mainstream and especially populist parties. A one percentage point increase in unemployment is associated with a one percentage point increase in the populist vote. The association is especially strong in the south, where voters turn mostly to radical-left parties. In the north increases in regional unemployment are correlated with a rise in far-right party vote. This pattern is also present in eastern Europe, where people are moving towards xenophobic, anti-European parties. These associations do not necessarily imply causality. To advance on causality we associate voting patterns to the component of changes in unemployment stemming from the pre-crisis share of construction (which is strongly related to falling unemployment pre-2007 and rising unemployment post-2008). This approach also yields a strong correlation between the recent rise of the populist vote and industrial specialization–driven unemployment. We then examine the role of the crisis on the Brexit vote across the UK’s 379 electoral districts. In line with the European-wide results, [the data] show that the increases in regional unemployment before the referendum (2007–15) are strong predictors of the Brexit vote, while the level of unemployment is not much related to Brexit. We then study the evolution of trust, political beliefs and attitudes before and after the 2007–10 crisis and examine whether swings in unemployment are related to changing ideology. We use individual-level data on Europeans’ beliefs and attitudes from the European Social Survey that covers the period 2000–2014. [The data] show that increases in regional unemployment have resulted in a deterioration of trust towards national and European political institutions. All of this suggests what Wolf stated: “Economic and cultural phenomena are interrelated.”