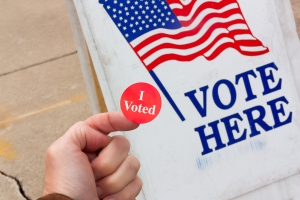 I’ve already provided the actual data on a single vote’s value (reminder: it’s virtually zilch). Despite this fact, plenty of people still vote. Why? The Greater Good Science Center at UC Berkeley has an insightful article on the emotions involved with voting:

Voting is an act of altruism. When you vote, you are taking your personal time and effort to advance the collective good, without any guarantee of personal reward—the very heart of what it means to be altruistic.

…In one study, Panagopoulos sent postcards to a subset of random voters before a special election in New York and before a gubernatorial election in New Jersey. The postcards contained either a message encouraging people to vote or a message thanking them for having voted in a recent election. Then, he compared voting percentages for those two groups to a control group who received no postcards.

…“Making people feel good by reinforcing the notion that society is grateful for their participation in the political process reminds people that they have a role to play and reinforces their willingness to be responsive,” says Panagopoulos.

…[I]n another experiment, he sent postcards thanking people for political participation, in general—without reference to past voting—while others received either the thanks for voting or the reminder postcards used in the other experiments.

In the Georgia primary election that followed, Panagopoulos found that people who received the generic thank-you postcard were more likely to vote—as much or more so than people being specifically thanked for voting, and much more than those who got the simple reminders. To Panagopoulos, this confirms the idea that gratitude was key.

…In one study, people who received information about their own voting behavior in the past seemed to increase their propensity to vote in an upcoming election. Another study found that people will vote more in an election when they see that people they are close to are voting, and that this behavior can spread through social networks.

These kinds of studies add to a body of research showing that our social relationships and emotions play a significant role in how we vote. For example, one study found that when people are told that they might be recognized for voting in a local newspaper or put on an honor roll of voters—to induce feelings of pride—they vote in higher numbers.

Alternatively, when people are warned that their name will be published in a local newspaper for not voting—to induce feelings of shame—this also increases voting. Shame seems to have even more impact than pride.

Altruism, gratitude, friendships, pride, and shame are just a few reasons people go to the polls.