Contract enforcement is a major player in measuring the ease of doing business in a country. A new working paper demonstrates the importance of enforceable contracts to firm productivity:

In Boehm and Oberfield (2018) we study the use of intermediate inputs (materials) by manufacturing plants in India and link the patterns we find to a major institutional failure: the long delays that petitioners face when trying to enforce contracts in a court of justice. India has long struggled with the sluggishness of its judicial system. Since the 1950’s, the Law Commission of India has repeatedly highlighted the enormous backlogs and suggested policies to alleviate the problem, but with little success. Some of these delays make international headlines, such as in 2010, when eight executives were convicted in the first instance for culpability in the 1984 Bhopal gas leak disaster. One of them had already passed away, and the other seven appealed the conviction (Financial Times 2010)

These delays are not only a social problem, but also an economic problem. When enforcement is weak, firms may choose to purchase from suppliers that they trust (relatives, or long-standing business partners), or avoid purchasing the inputs altogether such as by vertically integrating and making the components themselves, or by switching to a different production process. These decisions can be costly. Components that are tailored specifically to the buyer (‘relationship-specific’ intermediate inputs) are more prone to hold-up problems, and are therefore more dependent on formal court enforcement. 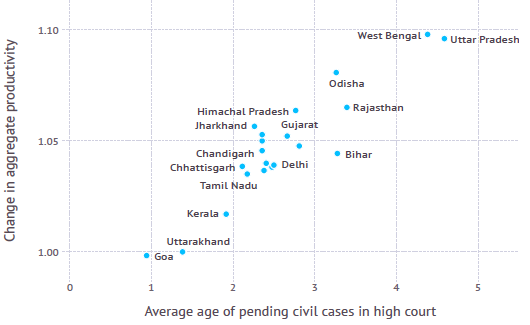